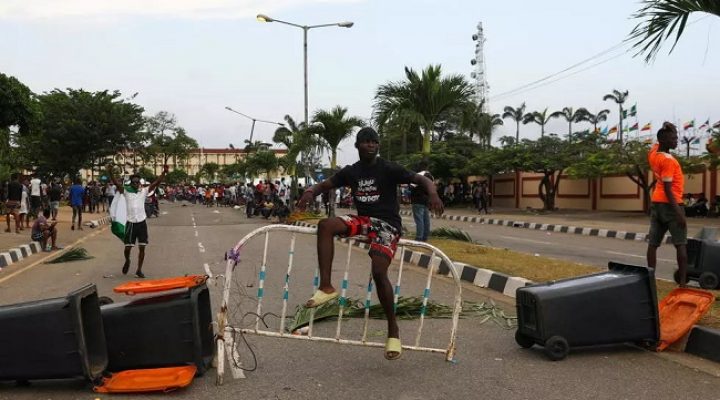 Buildings were torched in Nigeria’s biggest city Lagos on Wednesday as authorities shut down the economic hub, after the shooting of peaceful protesters by security forces caused international outrage.

The Nigerian army did not respond to AFP’s requests for comment but on Twitter it called reports of soldiers firing on protesters “fake news”.

The west African ECOWAS bloc appealed to the Nigerian government, its youth and civil society “to urgently pursue dialogue for an early and amicable resolution of this social unrest and maintain the Nigerian image as a bastion of law and order.”

Nana Akufo-Addo, chairman of ECOWAS and president of neighbouring Ghana, said in a statement that he had spoken with Nigerian President Muhammadu Buhari, who had “begun the processes that will lead to reform”.

The centre of Lagos, a sprawling city that is home to 20 million people, was largely deserted and shops were closed on Wednesday under a curfew.

An AFP journalist said several buildings were burnt around the area of the shooting and remnants of the violence—broken glass, torn banners—could be seen.

A few people were drifting around, but protest hotspot Lekki Toll Gate had emptied out, only graffiti denouncing police violence and bad governance remaining.

A dozen soldiers and heavily armed police officers patrolled nearby.

In another district a bus station was set ablaze and there were sporadic clashes between bottle-throwing youths and police, who occasionally fired into the air.

A TV station linked to one of the ruling party’s most powerful politicians was also torched.

Concerned by the escalating violence reported on Wednesday in a string of cities including Lagos, the International Committee for the Red Cross called for restraint.

“It is of paramount importance that first responders and ambulances are respected by all, so they can reach injured people safely,” said Eloi Fillion, head of the ICRC delegation in Nigeria.

In a television broadcast, Lagos state governor Babajide Sanwo-Olu ordered all “state activities” to be halted across the city for three days.

He said he had asked for a probe into “the rules of engagement employed by the men of the Nigerian army that were deployed” at the scene during the shooting on Tuesday.

At least 56 people have died across the country since the protests began on October 8, with about 38 killed on Tuesday alone, according to Amnesty.

President Buhari was yet to directly address Tuesday’s incident but in a statement on the protests the presidency said he had appealed for “understanding and calm across the nation”.

A coalition of civil society organisations in Nigeria said on Wednesday that they were “deeply shocked by the killing of peaceful protesters”.

“The attempt to fight for justice over police brutality has again revealed the brutal nature of the Nigerian state,” it said in a statement.

According to the group, “not less than 40 Nigerians have lost their lives as a result of violent attempts to crack down or disrupt the ongoing protests against police brutality.”

Nigeria, where the median age is 18, is a tinderbox of profound economic and social grievances.

British Foreign Secretary Dominic Raab said on Wednesday he was “deeply concerned” by violence in Nigeria.

“The Nigerian government must urgently investigate reports of brutality at the hands of the security forces and hold those responsible to account,” he said in a statement.