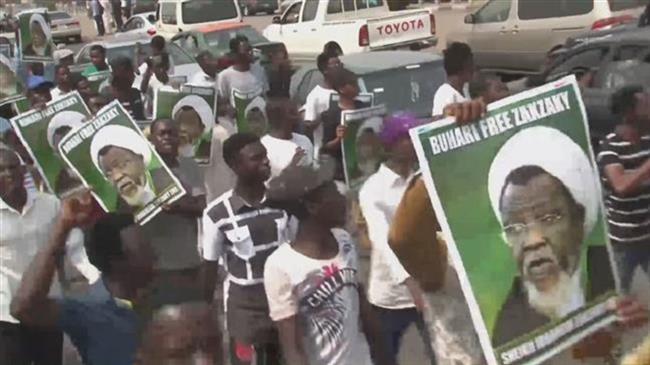 Supporters of the Islamic Movement (IMN) in Nigeria have staged yet another peaceful protest, demanding justice for a slain Muslim cleric and their leader Sheikh Ibrahim Zakzaky, Press TV reports.

On Tuesday, hundreds of members of the Islamic Movement poured onto the streets of the capital Abuja to demand justice for the slain cleric Sheikh Qassim Umar. They said the perpetrators of the crime must be brought to justice.

Umar recently died of wounds he sustained during an earlier protest in January.

The procession further pressed for the immediate and unconditional release of their leader Sheikh Zakzaky, who has been held in custody for more than two years in Nigeria.

The top Shia cleric lost his left eyesight in a raid which was carried out by the Nigerian army on his residence in the northern town of Zaria in December 2015.

During the raid, Zakzaky’s wife sustained serious wounds too and more than 300 of his followers and three of his sons were killed. Zakzaky, his wife, and a large number of the cleric’s followers have since been in custody.

The raid occurred a day after Nigerian soldiers attacked a group of Shia Muslims attending a ceremony at a religious center in the city of Zaria, accusing them of blocking the convoy of the army’s chief of staff and attempting to “assassinate” him, which the Shia Muslims strongly denied.

Despite the ruling of a Federal High Court, which ordered his unconditional release in 2016, the Nigerian government has refused to set him free.

Last month, a UK-based NGO known as the Islamic Human Rights Commission, voiced concern over the health condition of the detained Muslim cleric. The commission in a statement also called on Nigerian authorities to immediately release Shiekh Zakzaky over his deteriorating health condition.

“In view of his deteriorating health, it is now more urgent than ever to allow Sheikh Zakzaky to be allowed access to immediate medical attention in order to assess the extent of his injuries caused by the stroke and access the necessary medical treatment,” read the statement.

Nigeria allowed Zakzaky to make a rare public appearance last month to counter rumors that he had died.

IMN’s followers have been subjected to a heavy-handed crackdown since two years ago when the army attacked a religious ceremony in their stronghold of Zaria.