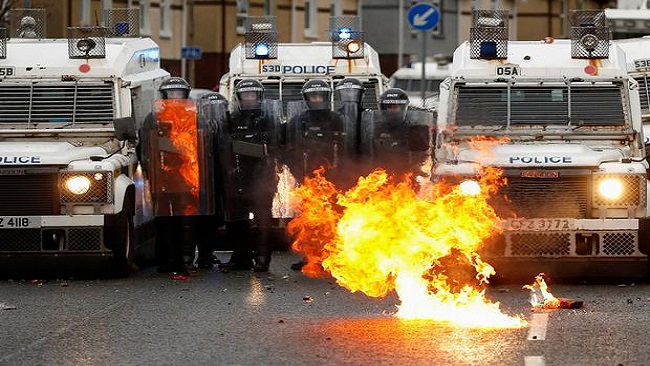 Northern Ireland police faced a barrage of petrol bombs and rocks on Thursday, an AFP journalist said, as violence once again flared in Belfast despite pleas for calm.

Riot police on the republican side of the divided city were pelted with projectiles as they tried to prevent a crowd moving towards pro-UK unionists.

Martin and Johnson held telephone talks in which they stressed that “violence is unacceptable” and “called for calm”, the Irish leader’s office said.

But their calls went unheeded as night fell in Belfast, with unrest breaking out on the republican side of the capital.

Rioting over the last few days—the city’s worst unrest in recent years—had mainly stemmed from its unionist community, leading to joint condemnation from political leaders in the British province.

Unionists are angry over apparent economic dislocation due to Brexit and existing tensions with pro-Irish nationalist communities.

“Destruction, violence and the threat of violence are completely unacceptable and unjustifiable, no matter what concerns may exist in communities,” said the Northern Ireland executive—made up of unionist, nationalist and centrist parties.

“While our political positions are very different on many issues, we are all united in our support for law and order.”

He called the joint condemnation “a very clear statement”, adding “there is no excuse for violence, we’ve got to make sure we take things forward in a proper democratic and political way.”

In Washington, the White House also expressed concern over the violence and urged calm.

In the disorder on Wednesday, gates were set alight on a “peace line”—walls separating pro-Irish nationalist and unionist communities—and police said crowds from either side broke through to attack each other with petrol bombs, missiles and fireworks.

“The fact that it was sectarian violence and there was large groups on both sides… again is not something we have seen for a number of years,” he told reporters.

Before Thursday, six nights of unrest left 55 police injured, Roberts noted, as well as a press photographer and the driver of the bus fire-bombed Wednesday.

He said children as young as 13 were suspected of involvement following encouragement from adults, and the large volume of petrol bombs used suggested “a level of pre-planning”.

The PSNI is probing if Northern Ireland’s notorious paramilitary groups were involved in the unrest.

Unionist paramilitaries, British security forces and armed nationalists seeking to unite the territory with the Republic of Ireland waged battle until a landmark peace deal in 1998.

The accord let unionists and nationalists coexist by blurring the status of the region, dissolving border checks with fellow European Union member Ireland.

But Britain’s 2016 vote to quit the EU revived the need for border checks. A special “protocol” was agreed that shifted the controls away from the land border to ports trading with the UK mainland, prompting many unionists to accuse London of betrayal.

There was also recent outrage among unionists after Northern Irish authorities decided not to prosecute Sinn Fein leaders for attending a large funeral last year of a former paramilitary leader, in apparent breach of Covid restrictions.

Few people in central Belfast on Thursday wanted to discuss the sensitive situation.

“It’s deep-rooted, it’s not just about Brexit,” said Fiona McMahon, 56, before adding Britain’s EU withdrawal had had a “massive impact”.

“The British do whatever the hell they want to do and we get landed with everything afterwards,” she told AFP.

PM Johnson tweeted overnight that he was “deeply concerned”, saying “the way to resolve differences is through dialogue, not violence or criminality”.

Johnson and Martin agreed during their call that “the way forward is through dialogue and working the institutions of the Good Friday Agreement,” according to Dublin.