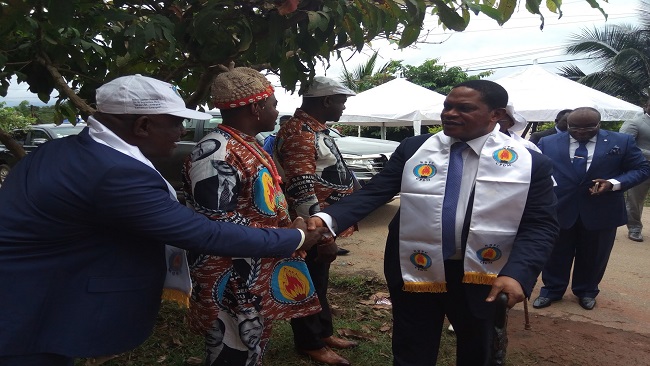 Of Minister Victor Mengot, La Republique and trip to Manyu 0

One of the tests of a genuine individual is a measure of his or her moral compass. It’s gloomy but true that in the world of today, high standards and honest values are considered antiquated. In a statement dated the 16th of January 2018 by MANYU ELEMENTS CULTURAL AND DEVELOPMENT ASSOCIATION (MECDA), the lack of decency has never been apparent. The garbage coated as a statement, bereft in courtesy and honesty was signed by MECDA Patron, Minister Victor Mengot.

The statement is the most blatantly dishonest statement ever uttered by a creature famous for uttering deceitful statements.

The people of Manyu have been bombed and shot at by the forces of La Republique and none of these so-called elites have said a word or done anything about it. Families without number have lost loved ones. Many young men are now living in the bushes for fear of arrest and murder by the forces of La Republique.  Internet access, which is a fundamental human right in the 21st century has been cut-off for months and none of these so-called elites has said a word.

No one ever contemplated they would witness a day when people of Manyu origin would be refugees in Nigeria. But that is a normalcy under the auspices of these so-called elites. My heart bleeds and the anger in me is immense for a statement like this could only come from the darkest of human minds.

In the circumstances, would it be irresponsible to call for a disruption to this meeting? Has there ever been a more justifiable reason for vengeance? I’ll let your readers answer these questions.

One of the issues that people like Minister Mengot have to understand is that the days when ‘elites’ use to visit our parents and trick them with bags of rice and salt are over. Today, Manyu indigenes live in every corner of the world and are exposing themselves to different cultures, good books and great colleges a new Manyu person has emerged. This new Manyu person doesn’t have to listen to the madness of old. This nonsense of patronizing us with messages and goodwill gestures and initiatives from Yaoundé is something for the birds.

As a people, all we need now is an occupation free Ambazonia so our families can mourn their loss whilst we plan to rebuild a county Minister Mengot and his mates lacking in decency have destroyed.