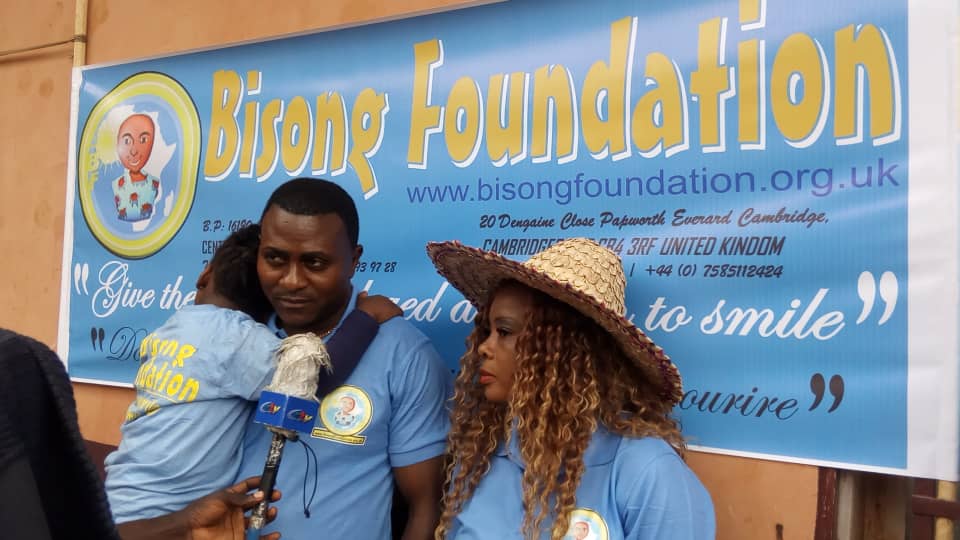 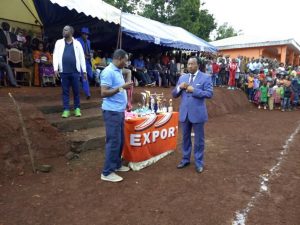 Though visibly grateful for another day of donations from Bisong Foundation, Thursday, August 16, 2018, the Orphelinat Le Bon Samaritain (Good Samaritan Orphanage) in Babete is, like Oliver Twist, asking for more.

After giving thanks for the donation of a washing machine and a flat screen TV set, and the usual donation of school needs towards the start of the school year, the director of the orphanage, situated near Mbouda in the West Region of Cameroon, Mrs Fomekong Tikun Jeanne Sylvie, presented demands for more needs to the foundation which is registered in the United Kingdom as a charity.

“Despite the efforts made to support these children, to provide them with recreational facilities,it remains challenging for us to attain our desired goals,” said Tikun. She therefore pleaded for help in acquiring the following: “A befitting playground and provisions to replace worn out or damaged equipment (beds, mattresses, blankets, water heaters and drying lines.”

Presenting the orphanage, Tikun said it was created in 2006 by reverend sisters of the St. Benedict Monastery in Babete who hatched the idea after two newborns were brought to their care within weeks towards the end of 2005. She said the orphanage admits destitute children from ages0-6 years.

In her balance sheet, she saidover the years, 16 children from the orphanage have been fully rehabilitated and have reintegrated their natural families. She praised Bisong Foundation for its help which she said has boosted the morale of the orphans and bolstered them to obtain good results in school.

“Out of the 18 orphans going to school, 15 obtained promotion to the next class, two of them successful in the primary school certificate examination,” she said. 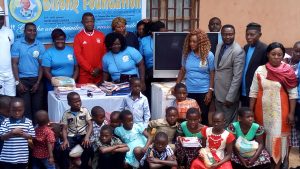 Acknowledging praise by the director of the orphanage, the founding president of the foundation, Bisong Michael said his foundation is also supporting seven other orphanages across three regions of Cameroon. He acknowledged the presence at the ceremony of his friend, Dr Bola Stephan, a Cameroonian also visiting from the UK, whom he said is a benefactor of the Bisong Foundation. He said Bola often mobilises friends and well-wishers to support the foundation’s activities in the UK.

Visibly overflowing with joy at what he saw, Bola said he will report back to those he called his group in the UK. He said, though he would not make any concrete promises, he trustshis “group” will make a significant contribution.

Bisong also welcomed the presence of Joseph Kamga, a former Indomitable Lion and former captain of Union Douala who travelled all the way from Douala for the purpose. Speaking in turn, Kamga said in reference to the founding president and the co-founder of Bisong Foundation: “What gives a man reputation is the works of his good heart.”

Promising his own contribution to the efforts of the foundation, Kamga said if things go as planned, a host of former Indomitable Lions including Joseph Antoine Bell and Roger Milla would accompany Bisong Foundation to the orphanage next year.

Mrs Bisong Hortence Manto launched the presentation of donation items to the kids which included school fees and school needs for all 18 children, health and hygiene needs, foodstuff, toys and snacks.

Bisong Foundation will in the days ahead make a donation to internally displaced persons (IDPs) in Manyemen, Mr Bisong’s village of origin.

The Babete orphanage donation ceremony was preceded by a mass at the local parish. The officiating priest said God rewards those who share with the needy. In a football match with staff of the Babete Monastery, Bisong Foundation won 2-1.

Part two of Bisong Foundation activities in Cameroon this year was at Bamesso, also near Mbouda, native home of Mrs Bisong. For the second year running, the foundation awarded trophies and medals to laureates of the village annual football and handball tournaments after the finals on Saturday, August 18,2018.

Some of the trophies and medals were presented by the minister of Public Works, Emmanuel Nganou Djoumessi, an elite of the village and honorary president of the village development association known in French as Comité de Développement de Bamesso (COMDESSO). At the end of the ceremony, the minister saluted Bisong Foundation’s contributions towards development and in alleviating the plight of the underprivileged.

In an exhibition footballmatch earlier that day, Bisong Foundation played a 1-1 draw with the Veterans of Mbouda who opened scores in the first half through their No. 10 player, Awanang Maximilien, alias Musa. Bisong Foundation’s equalizer came in the second half also through their No. 10 player, 16-year-old George Ngonde alias Leonel Messi who is a semi-professional player with a club in Kumba in the South West Region of Cameroon.