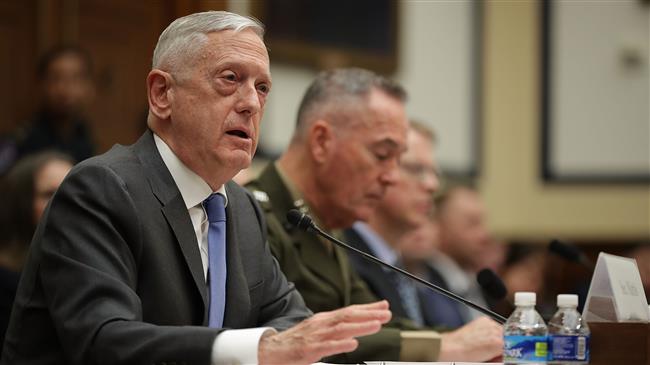 US Defense Secretary James Mattis has warned that a military strike on Syria carried the risk of spiraling out of control, cautioning the White House as it weighs how to respond to a suspected chemical attack outside Damascus last weekend.

Speaking before a House Armed Services Committee hearing on Thursday, Mattis said his primary concern in planning military action was avoiding anything that would trigger a wider war.

“On a strategic level, it’s how do we keep this from escalating out of control,” he said.

President Donald Trump initially threatened this week that he was committed to attacking the government of President Bashar al-Assad, which he accused of using chemical weapons in Douma.

However, Trump later softened his rhetoric, suggesting he was awaiting further advice and assessment before a final decision was made.

“Never said when an attack on Syria would take place,” he tweeted. “Could be very soon or not so soon at all!”

Mattis insisted the US policy in Syria still remained the same, which was the total defeat of the Daesh terrorist group without getting directly involved in the conflict.

“Our strategy remains the same as a year ago,” he said. “It is to drive this to a U.N.-brokered peace but, at the same time, keep our foot on the neck of ISIS until we suffocate it,” referring to Daesh.

The terror organization has been driven from most of the territory it held in Iraq and Syria, but pockets of militants remain.

On Thursday, Russia announced that the Syrian army had liberated Douma less than two months into its counter-terrorism operation in Eastern Ghouta.

“With every victory achieved on the field, the voices of some Western states are raised and actions are intensified in an attempt by them to change the course of events,” President Assad said after the announcement.

“These voices and any possible action will contribute nothing but an increase in instability in the region, threatening international peace and security,” he was quoted by Syrian state TV as saying.

The US has been in close consultations with Britain and France about launching a military operation in Syria as early as the end of this week, officials said.

French President Emmanuel Macron said Thursday France had proof the Assad government launched chlorine gas attacks, and that it would not tolerate “regimes that think everything is permitted.”

British Prime Minister Theresa May met with her cabinet, agreeing that it was “highly likely” President Assad was responsible for Saturday’s alleged chemical attack in Douma.

May’s cabinet agreed on the need to “take action” against the Syrian government, but added that the prime minister would continue to coordinate with allies.

Mattis, however, told lawmakers that the United States still had no hard proof, but he believed the Syrian government was responsible for Saturday’s attack.

The Organization for the Prohibition of Chemical Weapons, based in the Netherlands, announced it was deploying a fact-finding team to Douma, which was expected to arrive Saturday.

US officials have not said whether the presence of the international investigators could affect the timing of a potential military strike.

The plans for military action have especially been complicated because of the presence of roughly 2,000 Russian troops, who have been stationed in the country since 2015.

Russia has raised the possibility of a military confrontation with the United States if Syria is attacked. Russia also has sophisticated air defense systems in Syria and has threatened to shoot down American missiles.