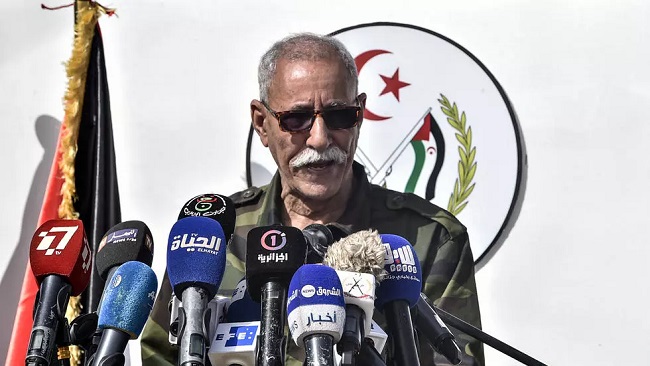 Polisario leader in court in Spain: what we know 0

The leader of Western Sahara’s independence movement, whose presence in Spain has angered the Moroccan government, will appear before a Spanish court Tuesday to answer allegations of torture and genocide.

Madrid’s decision to allow Brahim Ghali, who heads the Algeria-backed Polisario Front, into Spain in mid-April to be treated for Covid-19 has angered Rabat.

A month later, Spain was caught off guard as up to 10,000 people surged into its tiny north African enclave of Ceuta as Moroccan border guards looked the other way in what was widely seen as a punitive political gesture.

Here is what we know so far:

Since 2016, Ghali has been head of the Polisario Front and president of the Sahrawi Democratic Arab Republic, a self-declared state since 1976.

Ghali is 71, the movement says, although other sources give a different age.

The Polisario Front has long fought for the independence of Western Sahara, a desert region bigger than Britain which was a Spanish colony until 1975.

Morocco controls 80 percent of the territory, while the rest — an area bordering Mauritania that is almost totally landlocked — is run by the Polisario Front.

A disputed territory, the UN refers to Western Sahara as a “non-self-governing territory” whose people “have not yet attained a full measure of self-government”.

After 16 years of war, Rabat and the Polisario signed a ceasefire in 1991, but a UN-backed referendum on self-determination has been constantly postponed.

Hostilities resumed in November when the Polisario, which is backed by Algeria, declared the ceasefire to be over after Morocco sent troops into a UN-patrolled buffer zone to reopen a key road.

Ghali’s hospitalisation in Spain was shrouded in secrecy.

It was first revealed by French pan-African magazine Jeune Afrique then confirmed by the Polisario and Spain’s foreign ministry, which called it a “humanitarian gesture”.

It said he was admitted to a hospital in northern Spain with a fake identity for “security reasons”.

Madrid agreed to receive Ghali as a favour to Algeria, its main supplier of natural gas, El Pais said.

But the move angered Rabat which has demanded a “transparent investigation” over his arrival in Spain “with forged documents and a fake identity”.

Now “out of danger” but still in hospital, Ghali will testify by video conference in two separate investigations.

One relates to allegations of torture at Sahrawi refugee camps in Tindouf, a town in western Algeria. The accusations were made by Polisario dissident Fadel Breika, who also holds Spanish nationality.

The second probe relates to allegations of genocide, murder, terrorism, torture and disappearances made by the Sahrawi Association for the Defence of Human Rights (ASADEDH), which is based in Spain.

Given there were no “clear indications of his involvement”, a Spanish judge refused to impose any precautionary measures such as seizing Ghali’s passport, court documents showed.

With Ghali considered a “war criminal” by Rabat, the Moroccan government decided to turn a blind eye at its shared border with the Spanish enclave of Ceuta, where up to 10,000 people crossed unhindered early last week.

“The real cause of the crisis is Madrid’s welcoming of the separatist leader of the Polisario militia, under a false identity,” Moroccan Foreign Minister Nasser Bourita said.

Madrid has accused Rabat of “blackmail” and summoned its ambassador, who has been recalled to Morocco for consultations where she will stay “for the duration of the crisis,” the minister said.