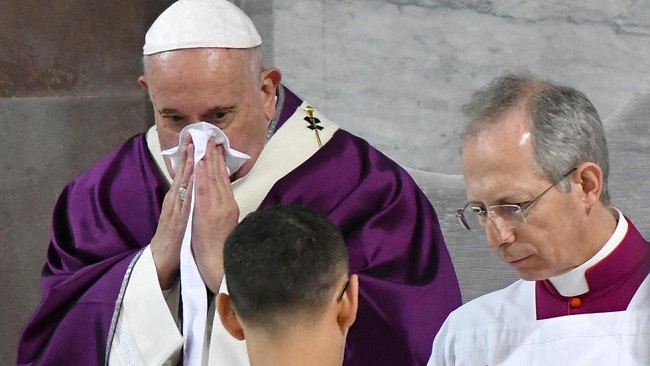 Pope Francis said Sunday he would not be taking part in a planned six-day spiritual retreat south of Rome after coming down with a “cold”.

The 83-year-old pontiff suffered two coughing spells that forced him to turn away from the crowd and cover his mouth with his fist on a windy and cloudy day on Saint Peter’s Square.

“Unfortunately, a cold forced me not to take part this year,” he said after reciting the traditional Angelus Prayer and addressing the unfolding migrant crisis on Turkey’s border with Greece.

The annual retreat will still start Sunday but only include members of the Roman Curia administration team of the Holy See.

The pope will be staying home while the rest of Italy battles Europe’s worst outbreak of the novel coronavirus that has spread from China to every continent except for Antarctica.

The number of cases in Italy surpassed 1,000 on Saturday and the toll continues to mount.

There have been 29 confirmed deaths and 105 people were receiving intensive care treatment in hospital — all of them in three adjacent northern regions near Milan.

The Vatican quickly shot down speculation that the pope himself had come down with COVID-19.

“There is no evidence to suggest a diagnosis of anything other than a slight ailment,” a Vatican spokesman told AFP Sunday.

The pope himself looked relatively strong on Sunday despite the coughing fits.

He smiled a few times and addressed a range of theological issues before turning his attention to the plight of thousands of migrants from Turkey who have been blocked at the rugged frontier with Greece.

“I am a little saddened by the news coming from many displaced people, so many men, women and children chased because of war,” Francis said.

The pontiff asked the faithful to share a prayer for “so many migrants who seek refuge in the world — and help”.

Concerns about the pope’s health have been mounting for days in a country where mass closures of public institutions and businesses due to the coronavirus are affecting the lives of millions.

He first looked like he might be sick on Wednesday and lightened his workload for the rest of the week.

The Vatican used the “mild ailment” term for the first time on Thursday to explain why the pope was spending his day around his Saint Martha’s guest house in the Vatican.

But he still continued celebrating the morning mass and receiving visitors even as football matches were being cancelled and businesses were telling their employees to work from home.

He met with the Ukrainian Greek Catholic Church head Sviatoslav Shevchuk on Saturday and spent almost 15 minutes speaking on Sunday from his Vatican window.

The Argentine-born pontiff has enjoyed a life of good health despite losing part of a lung as a young man and suffered from sciatica — a nerve condition that causes pain in his hip.

Yet he rarely cancels appointments and normally takes extra time to mingle with supporters and the faithful.