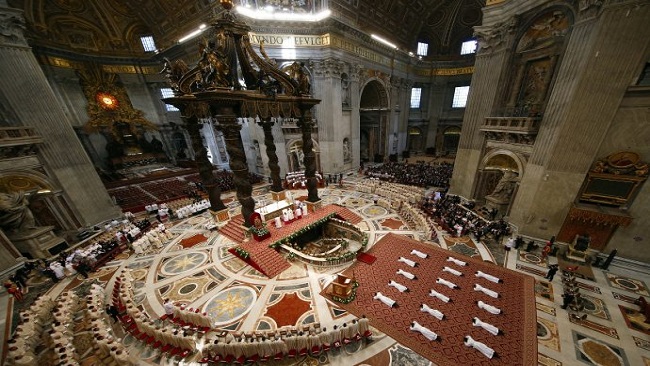 Pope Francis to new priests: Be like Jesus the Good Shepherd 0

On Sunday, Pope Francis ordained 16 men to the priesthood, reminding them to be like Jesus the Good Shepherd in the way they serve the members of their spiritual flock and minister to those who are lost and searching for God.

“Always have before your eyes the example of the Good Shepherd, who did not come to be served, but to serve and to seek and save what was lost,” the pope said in a homily before the ordination of 16 priests during a Mass in St. Peter’s Basilica April 22.

“Conscious of having been chosen among men and elected in their favor to attend to the things of God, exercise in gladness and sincere charity the priestly work of Christ,” he continued, “solely intent on pleasing God and not yourselves or human beings, [or] other interests.”

The priestly ordination coincided with “Good Shepherd Sunday” and the 55th World Day of Prayer for Vocations.

The new priests, who have been studying for the priesthood at different seminaries in the diocese of Rome, come from countries around the world, including Madagascar, Vietnam, Myanmar, Colombia, and El Salvador.

As in the past, for his homily Francis used the “ritual homily” from the Italian edition of the “Pontificale Romano,” the Catholic liturgical book containing rites performed by bishops, including the ordination of priests, adding a few of his own thoughts to the text.

Reflecting on the Sacrament of Penance in particular, Francis urged the men about to be ordained to “not get tired of being merciful. Think of your sins, your miseries that Jesus forgives. Be merciful.”

It is “through your ministry the spiritual sacrifice of the faithful is made perfect,” he noted, “because it is joined to the sacrifice of Christ, which for your hands, in the name of the whole Church, is offered bloodlessly on the altar in the celebration of the Holy Mysteries.”

He pointed out to the 16 men that in their priestly ministries they will be participants “in the mission of Christ, the only Master,” and advised them to read and meditate tirelessly on the Word of God “to teach what you have learned in faith, to live what you have taught.”

“[May] your teaching, joy and support to the faithful of Christ be the fragrance of your life,” he continued, “that with word and example you can build the House of God which is the Church.”

Francis reflected briefly on the day’s Gospel, where Jesus says: “I am the good shepherd. The good shepherd gives his life for the sheep,” stating that the words of Jesus in this passage cannot be reduced to an emotional suggestion.

They have a concrete effect, he said: “Jesus heals through his being a shepherd who gives life. Jesus says to each one: ‘Your life is so valuable to me, that to save it I offer all of myself.’”

Noting that Jesus also says, “I am the good shepherd, I know my sheep and my sheep know me,” the pope said shows us that Jesus desires a personal relationship with each person, one which reflects “the same intimate relationship of love between Him and the Father.”

“He is attentive to each of us, knows our heart deeply: He knows our strengths and our faults, the projects we have achieved and the hopes that have been disappointed. But he accepts us as we are, he leads us with love,” he said, and in turn, “we are called to know Jesus.”