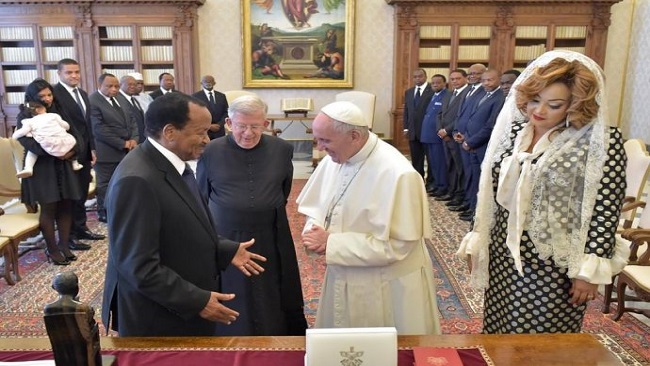 Pope, UN chief press for solution to the Ambazonia crisis as deadly fighting rages on 0

Pope Francis and UN Secretary General António Guterres have renewed pressure on the Cameroon government to find lasting solutions to the Anglophone problem in the western African nation.

According to a top government official who asked not to be named, Francis and the UN boss recently asked Cameroon’s “President for Life,” Paul Biya, to declare a ceasefire and to open a space for peaceful discussions.

The official told Crux that he took part in a meeting convened by the country’s Prime Minister, Joseph Dion Ngute, on May 7 to discuss the issue.

“In the days ahead, we will be going to the field to examine the possibilities of a ceasefire,” the official said.

“I think it is going to be relatively easy because the separatists have been reduced to an embattled core,” he said.

Separatists in Cameroon’s two English-speaking regions for nearly four years now have been fighting for what they call “the restoration of the statehood of the Southern Cameroons.” It’s the part of Cameroon colonized by Britain, but which, at independence, voted in a plebiscite to reunite with the part of the country colonized by France.

The two entities then formed a Federal Republic of two theoretically co-equal parts. That federation was scrapped in a controversial 1972 referendum and replaced with a united republic. Ever since, the minority English-speakers have always felt marginalized.

Pent-up frustrations burst to the open in 2017, when teachers and lawyers’ strikes over perceived attempts by the Francophone-dominated administration to wipe out the Common Law educational systems practiced in Anglophone Cameroon.

The military responded with lethal force. Rising anger crystallized into political demands, with the growth of separatists asking that Anglophones should carve out a separate state called Ambazonia.

The fighting, now in its fourth year, has left a minimum of 3000 people dead and over a million forced from their homes.

Resolving the Anglophone problem and restoring peace to the troubled country has become a major concern in the Francis Papacy.

On September 29, just one day before what authorities in Cameroon said was a ‘Major National Dialogue’ to resolve the Anglophone problem, Pope Francis asked worshippers at St. Peters’ Square to pray for a successful dialogue.

The Supreme Pontiff expressed his closeness to “the sufferings and the hopes of the beloved Cameroonian people,” and expressed the wish that the dialogue “might be fruitful and lead to peaceful, just and lasting solutions, to everyone’s benefit”.

During his traditional Easter Urbi et Orbi address last year, Francis again raised the issue of the Cameroon conflict when he prayed for conflict zones all over the world, calling on citizens of the world to be “builders of bridges, not walls” and to end “the roar of arms,” in conflict zones and the rest of the world.

Specifically citing Mali, Nigeria, Niger as well as Cameroon, the pope complained that Africa was “rife with social tensions, conflicts and at times violent forms of extremism that leave in their wake insecurity, destruction and death.”

In February and March 2019, the Vatican offered to broker dialogue in the conflict. In February, the Secretary for Relations with States of the Holy See, British Archbishop Paul Richard Gallagher, met with Cameroon’s External Relations Minister, LeJeunne Mbella Mbella, and said he was prepared to mediate on behalf of the Holy See.

On March 18, 2019, Monseigneur Julio Murat, the Apostolic Nuncio to Cameroon and Equatorial Guinea, brought a special message from Francis to Biya which bore on the Anglophone crisis.

“The Supreme Pontiff assures His Excellency the President of the Republic about his prayers for Cameroon, and expresses his desire for a just and peaceful solution to the crisis in the north west and south west of the country,” Murat said shortly after the meeting.

He said the Catholic Church was willing to “contribute to the promotion of the common good and to peace in Cameroon.”

Many observers believe the Church could make a contribution. According to the International Crisis Group, the Cathoic Church that represents nearly a third of Cameroon’s 24 million people is uniquely placed to arbitrate.

“The Catholic Church could help break this dangerous stalemate. Present in all ten of Cameroon’s regions, the Church is one of the country’s strongest institutions. Almost a third of Cameroonians are Catholic, and the Church operates a dense network of schools and hospitals. Cameroonians take its views seriously,” the group stated in a 2017 report.

“Other than the Catholic clergy, there are few prospective peacemakers. If no one fills that role, the separatist sentiment already voiced by many Anglophones will continue to grow, fueling further violence and exacerbating the ongoing insurgency in the Anglophone regions.”

Catholic clerics already have been involved in the search for solutions.

In November last year, the government entrusted Catholic prelates with leading two “peace caravans” to inform people of the English-speaking regions of the resolutions of an Oct. 29-Nov. 4 “Major National Dialogue,” aimed at ending the secessionist rebellion.

The two prelates came back with reassuring messages that there could be a return to peace, but those signs of hope have been dashed by continued fighting.

Guterres is pushing for a ceasefire amid the coronavirus pandemic.

“The fury of the virus illustrates the folly of war,” Gutterez said.

“That is why … I am calling for an immediate global ceasefire in all corners of the world,” he said.

This isn’t the first time the head of the global Catholic church and the UN chief have teamed up. Francis and Guterres met in the Vatican in December 2019, recording a joint video message appeal for an end to armed conflicts. Guterres hailed the pope for carrying a “clear moral voice.” “You are a messenger for hope and humanity – for reducing human suffering and promoting human dignity,” he said.

Biya may be especially receptive to a papal initiative, given that he’s a former seminarian with the Spiritan fathers. When Pope Benedict XVI visited Cameroon in 2009, Biya went out of his way to express fondness for the pope, even having billboards erected in the capital city in the run-up to the papal visit with a Photoshopped image of him and Benedict XVI together, despite the fact that, at that stage, the two men had never met.

Later Biya would also meet Pope Francis in the Vatican in March 2017.

However, despite efforts by the international community to obtain a ceasefire in Cameroon, the country’s two English-speaking regions are still witnessing extreme violence, with most of it orchestrated by the government.