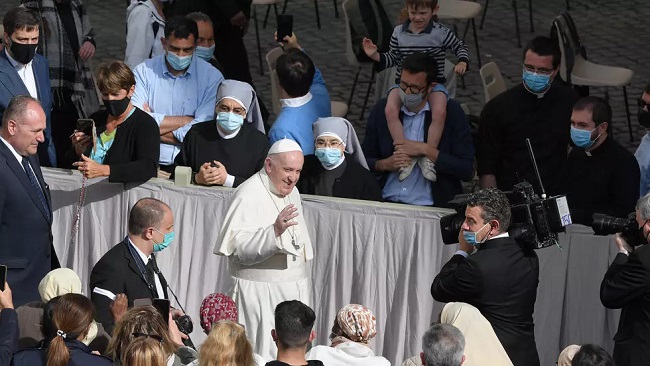 Pope’s joy as he resumes audience with public 0

Pope Francis expressed his pleasure Wednesday at being once again among his flock as he delivered his weekly general audience in public for the first time in six months.

He greeted a baby, signed a book, donned a hat someone gave him and chatted with children who had painted him pictures as the faithful — all in masks, unlike the vaccinated pontiff — lined up to greet him.

“I am happy to resume this face to face because I tell you one thing — it is not nice to talk in front of nothing, in front of a camera,” Francis told them as they sat on socially-distanced chairs to listen to his audience in the San Damaso Courtyard at the Vatican.

The pope abandoned his Wednesday public audiences when coronavirus swept across Italy early last year, instead delivering them via video link from the Apostolic Library.

They resumed in September and October — not in St Peter’s Square but in the courtyard with a limited crowd of 500 — only to stop once again due to a fresh wave of infections.

The courtyard was not full Wednesday, but the 300 or so people who came expressed their joy at seeing the pope up close.

There was a cheer when he arrived inside the courtyard in a blue Ford. “Pope Francis, we’re with you!” they shouted, standing on chairs to get a better view as he passed by.

“It was lovely, to see him so close — he wasn’t in a hurry, he took his time,” said a nun from Rome who gave her name as Helene.

“He was happy to be with the people.”

Thomas Viallon, 34, from Paris, added: “It was the first time weve seen the pope. We were really close. He seemed very close to the people.”