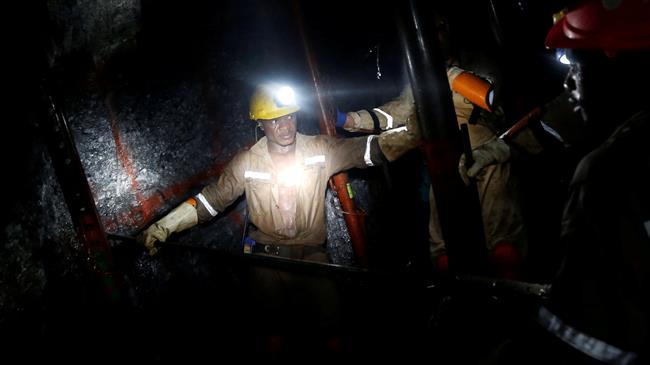 About 950 gold miners were stuck underground in South Africa on Thursday after a power cut, the mine’s owner said, though the workers were not reported to be in immediate danger.

The Sibanye-Stillwater mining company said a massive power outage had prevented lifts from bringing the night shift to the surface at the Beatrix gold mine, near the city of Welkom.

“We sent rescue teams down, accounted for all the people and we obviously are trying to get them out of there as soon as possible,” James Wellsted, spokesman for Sibanye-Stillwater, told ENCA television.

“All employees appear to be fine. We are supplying food and water,” Wellsted added in a telephone message to AFP.

He said the depth where the miners were trapped was uncertain, but the mine has 23 levels, going down to about 1,000 meters (3280 feet) below ground.

About 65 people were rescued during the day, with 950 remaining trapped by early evening, the company said.

Wellsted said that engineers were struggling to get emergency generators to operate and re-start the lifts.

“We are having some issues — probably related to the power surge linked to the storm — in getting the winders working, so we are busy working on that issue at the moment,” he added.

“Last night there was a severe storm in the Free State that affected two different power cables… and cut off all electricity supply to the mine, so we were unable to bring the night shift up.”

One cable was restored during the day.

The Beatrix mine is in Free State province, 290 kilometers (180 miles) southwest of Johannesburg.

AMCU, the Association of Mineworkers and Construction Union, said that the workers stuck underground were facing major health and safety risks.

“AMCU views this incident as extreme due to the sheer number of workers involved,” it said in a statement.

“The incident raises serious concern regarding the lacking emergency contingency plans at the mine for alternative and back-up power generation.”

It said workers’ lives could be in danger from dehydration and lack of nutrition, especially if they were on medication.

Last August five mineworkers died after sections of a gold mine collapsed outside Johannesburg.

The country possesses rich mineral reserves and has some of the world’s deepest gold mines.

Gold was for many decades the backbone of South Africa’s economy, but production has declined sharply due to depletion of reserves.