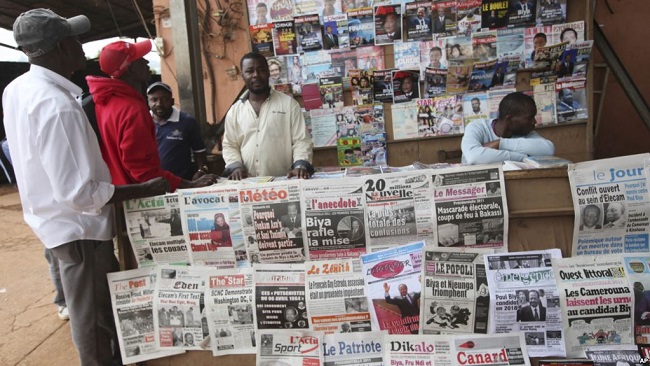 Press censorship in Cameroon: a cycle of fear 0

For the past three years, practicing journalism has become a daunting task for journalists in Cameroon’s conflict hit regions as the war tearing the English-Speaking community apart from the rest of the country deepens.

The humanitarian impact of the crisis which is now in its third year is only partially being told as the majority of media workers who have constantly reported about the crisis are labeled as terrorists or criminals.

Kiven Brenda, a renowned female journalist in Bamenda has not been in possession of her laptop for two years now, after it was confiscated by Security Officials in the North West Region.

She tells me that, government’s pressure and constant threats almost forced her to abandon her pen and give up on journalism in order to stay safe.

My laptop is still at the Judicial Police, seized February 2017. That is my work instrument where I stored all my data. I lost them all as I am not sure the laptop will ever be returned to me again…

Brenda revealed that her home was visited by security forces in her absence but despite these threats and harassment, she refuses to give up.

There came a time when I felt like giving up when they locked up the radio station, Radio Hot Cocoa, because they said we became unprofessional. Police came and searched my home] No matter how fair and balanced you are, you need courage to carry on.

According to Atia Tilarious in Buea, Acting Editor-in-Chief at The Sun Newspaper, the two belligerent parties in the armed conflict are making the practice of journalism hideous.

Atia spent over eight months in Yaoundé prison for doing his job as a journalist. He told me how every journalist is a potential terrorist in this time of crisis as the government uses the anti-terrorism law to silence the press.

Things have been further compounded by the obnoxious laws that we have, like the law of December 23, 2014 on the suppression of acts of terrorism that defines terrorism so broadly as to make the work of journalists difficult such as insulting state security, personalities, revolution, and insurrection.

This, according to Atia, explains why the story of the suffering masses in the North West and South West regions are yet to be told.

Journalists have tried their best but we have not done enough because, the humanitarian side of the crisis is not being told.

We focus more on what the armed groups and soldiers have done, but we fail to present the picture of the suffering masses. Those whose houses have been burned, destroyed, families killed, what has become of them, it’s a difficult thing for journalists to cover at this age and I think there is much more we must be doing.

The independence of the media in Cameroon has been a timeless debate, with the government assuring the national and international communities of its liberty.

But the escalation of the anglophone crisis has gone a long way to contradict this perception of the government, as media workers are not provided with guaranteed security instruments.

The worsening sociopolitical situation in the Northwest and Southwest Regions has made the job of media persons more complex. Our independence is being threatened more as days go by, because both factions in the ongoing crisis seek favorable attention from the Press. One becomes a direct target by either of the sides, once your reporting is judged out of favour for a party. Journalism is caught between two extremes, with each wanting the media to pick up a propaganda role in its favour.And, out of fear, many have given in to undertaking a role that puts them squarely out of their professional role of objective, accurate and fair reporting…

The president of SNJC South West President noted that the battle is now between the media, government forces and non-state armed groups.

On the one hand, the government has all it takes to arrest and lock up journalists for what they consider as offensive to public, on the other hand, pro-independence activists could target journalists considered too pro-government. Reporting therefore becomes a risky venture.

However, they  said that security is not the only barrier to press freedom in the conflict hit North West and South West Regions. Rose Obah, North West President of The Cameroon Community Media Network, lamented:

The curfews, ghost towns and lockdowns have prevented me from meeting deadlines and the quality and frequency of my peace and community development programmes are wanting because of the insecurity and threats regarding the content of my programme and news angles. As a journalist, I believe the situation is getting worse because violence is on the rise.

Meanwhile, Marcel Fokwen of The Post Newspaper, is worried about credible sources of information which have become scarce.

Cameroon’s political challenges have dealt a severe blow to the practice of journalism. The hostile environment has reduced the trust between credible news sources and the reporter.

In the days before the conflict, it was easy to get information from certain sources, but the current hostile atmosphere has shrunken the news source base for me as a journalist. Most of my news sources are no longer willing to speak openly. The crisis has reduced the authoritative tone of certain reports I could do before now.

During this instability, media workers want to be able to talk and exercise their duties freely without reprisals.

But how will that be possible without  genuine political action?

Derick Jato who has been covering the anglophone conflict since 2016 says it could still be years away from ending if nothing is done. The award-winning journalist said:

Three years gone, the only achievement, if that is the right word, is the continuous loss of lives. We have not seen a positive change. It is much more of a talking than an action situation. There is need for action and broad-based dialogue.

As we celebrate World Press Freedom Day, at least four journalists are still behind bars because they covered the anglophone crisis.