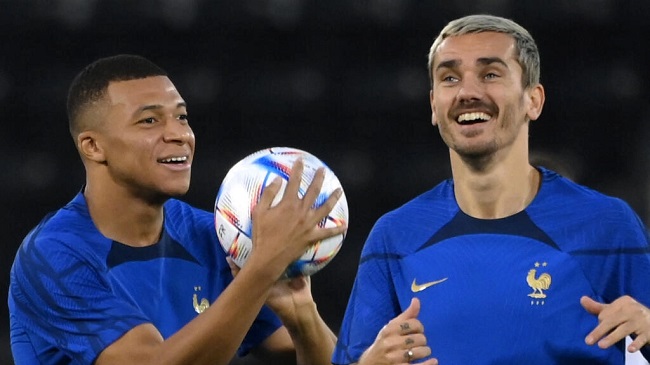 France go into their third group stage match against Tunisia as overwhelming favourites, having already secured their place in the knockout rounds with their impressive victories over Australia and Denmark.

Les Bleus take on Tunisia on Wednesday after a sparkling run of form that shows them to be top contenders to win the trophy, while lessening fans’ fears that they will repeat history and perform poorly as title-holders.

Antoine Griezmann massively surpassed expectations. Some had written him off as a has-been. But Griezmann has adapted well to Didier Deschamps playing him in a much deeper, more central position than his traditional role on the left wing of the French attack.

Olivier Giroud, however, was the star of the show against Australia. The AC Milan striker captured the attention of the footballing world by matching French hero Thierry Henry’s 51-goal record for Les Bleus. The 36-year-old consigned to distant memory his failure to score a single goal at the 2018 World Cup.

Ousmane Dembelé has been another outstanding player for France at the World Cup so far, with some searing runs, incisive passing and neat positional interchanges with Mbappé. So too has defensive midfield linchpin Aurelien Tchouaméni – a sterling replacement for the injured N’Golo Kanté and one of the breakout young players of the tournament so far. While he still has some distance to go in refining his talent and ensuring consistency, Tchouaméni shows a hint of Roy Keane’s toughness combined with a hint of Andrea Pirlo’s creative brilliance in that deep position.

Mbappé showed several missteps against both Australia and Denmark, with a sometimes clumsy first touch on the ball. Giroud, too, disappointed against Denmark after his brace against the Socceroos; Deschamps substituted him relatively early.

The French defence, meanwhile, let themselves down against their easy first opponent, as some sloppy positioning from Les Bleus’ back four allowed the Aussies’ Craig Goodwin to score that shock opening goal in the 9th minute.

But all of these problem should be relatively easy for Deschamps to correct – especially seeing as the ex-midfielder whom Eric Cantona once dismissed as a mere “water carrier”, one of just three men to have won the World Cup as both player and manager – is renowned for his tactical and strategic flexibility.

Raphael Varane has already returned to the fold after a hamstring injury ruled him out of the Australia match – providing much-needed ballast to that slightly rickety French defence. That’s while it seems churlish to note Mbappé’s rare faltering moments considering how much he has sparkled, not to mention his double against Denmark. As for Giroud, surely the chance to smash the legendary Henry’s record at international football’s highest competition will seem irresistible to one of the most underrated strikers in the world.

In light of all this, betting odds highly favour France. It doesn’t help Tunisia that they lost 1-0 to Australia on Saturday – letting the Aussies’ grit and determination overcome them days after Les Bleus found the Socceroos so easy to vanquish.

But everything is to play for in Wednesday’s match. The Eagles of Carthage, as Tunisia are nicknamed, showed similar grit and determination to hold the pertinacious Danes to a goalless draw in their first game.

They also have some strong players – albeit nothing like the world-class calibre of the Mbappés and Griezmanns. Goalkeeper Aymen Dahmen has shown himself to be a safe pair of hands; the only shot he conceded was the goal against Australia, which was the kind of shot many of the world’s best keepers can do nothing about. Mohamed Drager is an energetic and dynamic presence down the right flank, although lacks consistency. Striker Anis Ben Slimane did not feature in the Australia game, and was greatly missed for it; he is a solid goalscorer for his Danish club Brondby.

Yet it would be the brave pundit who bet money against France. History shows that World Cup champions keep faltering – and perhaps that will happen in the knockouts, as it did for Brazil in 2006 and Italy in 2010. But as things stand, France look like fairly decent contenders to pull off a whopping achievement and seize the World Cup twice in a row.