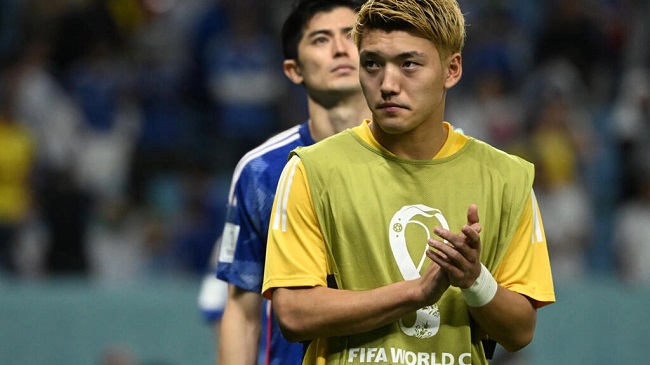 Qatar 2022: Japan wins over Germany and Spain count for nothing after World Cup exit, says Doan 0

Forward Ritsu Doan said Japan’s historic World Cup wins over Germany and Spain counted for nothing after the Blue Samurai were eliminated by Croatia in the last 16 on Monday.

Japan missed out on a first-ever place in the quarter-finals after a 3-1 penalty shootout defeat to the Croatians, following a gruelling encounter that finished 1-1 after extra-time.

Japan beat both Germany and Spain in the goup stage in Qatar but Doan took no consolation from his team’s achievements.

“I expected someone to say that if we lost, but to be honest it doesn’t mean anything,” he said.

“No matter how well we fought today, we didn’t change history.”

Daizen Maeda gave Japan the lead late in the first half before Ivan Perisic levelled for Croatia 10 minutes after the break.

Japan struggled to create more chances but held for penalties, only for Croatia goalkeeper Dominik Livakovic to save their first two spot kicks.

Croatia’s Marko Livaja hit the post to give Japan a reprieve but Livakovic saved Maya Yoshida’s kick to give Mario Pasalic match point for the Europeans.

Pasalic buried his penalty to send Croatia through, leaving Japan coach Hajime Moriyasu to lament his players’ failure to convert their spot-kicks.

“Penalties are a mix of luck and training,” he said.

“Their goalkeeper was excellent but the Japanese players should have done better and that’s something we need to work on in the future.”

Japan were aiming to reach the quarter-finals for the first time, having lost in the last 16 at three previous World Cups.

The team arrived in Qatar with 19 Europe-based players in their squad and midfielder Wataru Endo said they would need more overseas experience to take the next step.

“We need to have more players playing with European clubs — we need 20 or 30,” he said.

“We can improve our quality and become a better team. We are improving but we weren’t good enough to get to the quarter-finals.”

Moriyasu is also confident that Japan will return stronger.

“This result doesn’t cancel out everything the players have done here,” he said.

“They have shown they have the confidence to play at the world level and have shown how good they can be.

“Japanese football can continue to grow.”