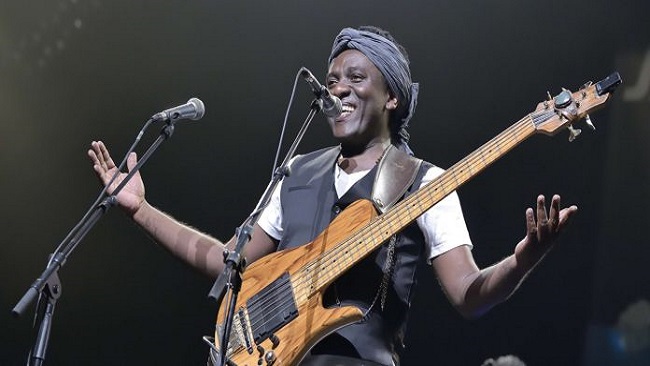 Richard Bona, a Cameroonian-born musician living in the U.S., is strongly criticized on Facebook over a video posted about three days ago. In the video, he called for the launch of “another war front” and an invitation to “burn” a TV station deemed too close to the government.

Responses immediately poured in. “Bro, is it your country? Go talk about your country and leave us alone…,” “You are not a Cameroonian so shut up…,” “Don’t talk about Cameroon,” are examples of comments posted by users to express their disagreement over the musician’s post.

For Richard Bona, Cameroonian opposition leader Maurice Kamto is an “obedient guy.” “I told him. Things wouldn’t have gone that way if another guy was in his shoes. Another war front would have been launched. Anyway, Ambazonians understood this. There is no other way than war with those looters and thieves,” he said in the video criticizing the delays in the construction of some of the infrastructures that will host the AFCON2021.

The video was posted on Facebook by some members of the Cameroonian diaspora who are harming people and properties in Europe with complete impunity, all in the name of a so-called fight for the wellbeing of Cameroonians. Those individuals usually rally through social media, Facebook most of the time. Yet, on several occasions, Facebook expressed its will to fight hate speech or addresses likely to spark violence or social unrest in all the countries represented by user communities on its platform.

Its system seems rather focused on influential countries and groups that can subject it to major political pressures. In Cameroon, like in several African countries, Facebook and WhatsApp have become useful tools for millions of users who wish to boost their business. The social platforms have also become political and ideological battlegrounds for unruly individuals with plots against elected persons and authorities.

Last October, U.S.-based media the Wall Street Journal published a journal series based on documents sent to the U.S. Congress and the Securities and Exchange Commission (SEC) by Frances Haugen, a former civic integrity team and product manager for Facebook later turned whistleblower against the online social media firm.

Before the congress, she indicated that “Facebook repeatedly encountered conflicts between its profits and our safety” and “consistently resolved those conflicts in favor of its profits.”

Media that read the documents leaked by Frances Haugen also report that although the internal management is aware of misuse of the social platform, warning signs are not always taken into account.

“The result has been a system that amplifies division, extremism, and polarization – and undermines societies around the world. In some cases, this dangerous online talk has led to actual violence that harms and even kills people,” reads Frances Haugen’s statement before the U.S. Congress.

In Africa, public authorities are regularly abused, threatened and their family members mocked with sometimes degrading words that would not be tolerated in any so-called democratic country. There are not many things African countries can do. Indeed, they can’t summon Facebook’s boss like the U.S. Congress or the European parliament would do. Also, when an African country chose to restrict or ban access to social media to prevent such abuses, it is immediately accused of taking a regressive move or being a repressive dictatorship.

The musician Richard Bona usually criticizes authorities about mismanagement deeds. Those criticisms are often supported by the general public which is upset about the misdeeds. However, the hundreds of negative comments about his recent video prove that there is a boundary most Cameroonians don’t want to cross no matter their political opinions or divergences.