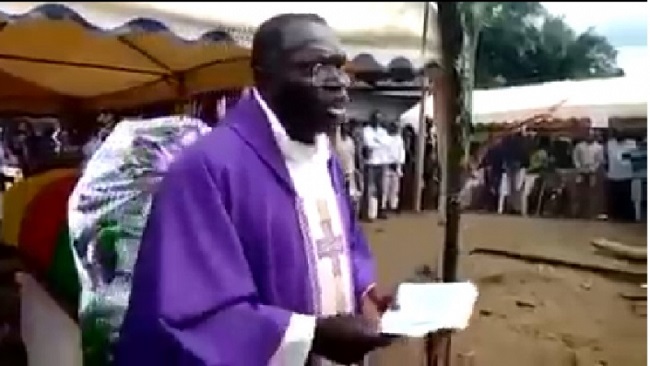 Roman Catholic Cleric tells Biya: “We do not want this war in Southern Cameroons” 0

A French Cameroun Roman Catholic priest has launched a scathing attack on the Biya Francophone Beti Ewondo regime calling on the 88-year-old dictator to stop the senseless war in Southern Cameroons.

“We do not want this war anymore. The children who are dying in Southern Cameroons are the children of the poor. We have never heard that the son or daughter of an army general has died there, that an army colonel’s child has died there in Southern Cameroons. Let’s stop, let’s stop!” the man of God told a predominantly Francophone audience during the funeral Mass of a soldier killed on the front line.

In the video widely circulated on social media networks, the Roman Catholic cleric can be heard shouting his indignation at the ravages of war in Southern Cameroons.

The much respected Minister of the Word also took the opportunity to appeal directly to the President of the Republic Paul Biya.

“I would like to ask you to please convey the message of the grieving families, the poor families, the families who have lost their children in this nasty way, we ask you to convey this message to the Head of State, that he should help us not to mourn our children anymore. The Cameroonian nation has all the possibilities to stop this murderous war. I pray in the name of the church that the Head of State will help us to stop crying for our children, please pass this message on to him,” the priest said.