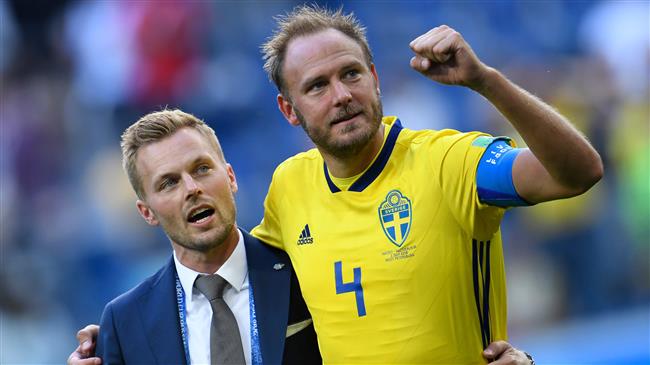 A Swedish national football team that resisted having famed Zlatan Ibrahimović in its World Cup 2018 roster has stunned many by advancing to the quarter-finals of the top global soccer event.

It was a deflected shot from Emil Forsberg on the 66 minutes that sealed Sweden’s 1-0 victory against Switzerland in St Petersburg on Tuesday.

The mostly dull game between the two European teams had nothing special to offer to the cheerful Swedish and Swiss fans as both teams hardly reached the area and had very few shots on target.

However, the Swedes outclassed their opponents in creating a few clear chances in the box with Marcus Berg and Albin Ekdal missing notable opportunities in the first half. It was RB Leipzig’s Forsberg, whom many have seen as a right replacement for Zlatan, who struck with a deflection off Swiss defender Manuel Akanji.

Sweden could make it 2-0 in the stoppage time when the referee first awarded a penalty but then revised his decision after consulting the video assistant referee (VAR) to award a free kick, which was saved by Swiss goalie Yann Sommer.

Sweden opened the World Cup against the backdrop of rumors that Zlatan was ready to rejoin the national team two years after he had announced retirement. Coach Janne Andersson rejected the offer and said the towering forward, known for his long and productive career in some of Europe’s top clubs, would have no place in his World Cup squad.

In the quarter-finals, Sweden will take on the winner of the last game of the round of 16 between England and Colombia later on Tuesday.

The 2018 FIFA World Cup Russia will end on July 15 with the final match in Moscow. Teams will begin the round of eight on Friday.