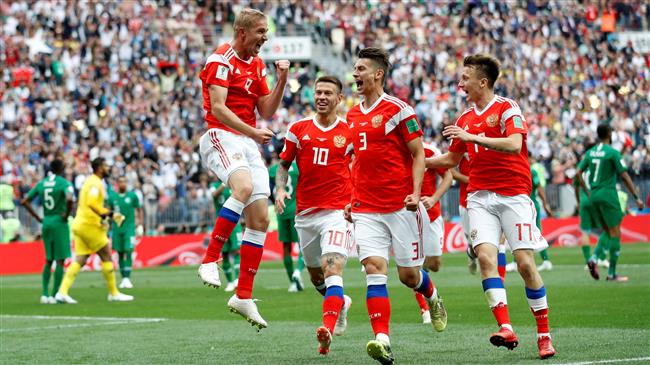 The Russian sportsmen outclassed their feeble Saudi Arabian rivals 5-0 in the tournament’s opening match at the Luzhniki Stadium in the Russian capital city of Moscow on Thursday evening to put an end to their nine-month winless run, and boost the morale of the host nation’s team and fans.

The spectators were sent into raptures after only 12 minutes, when 28-year-old Russian midfielder Yury Gazinsky headed home for the opener.

Denis Cheryshev showed great skill of his own later on, and unleashed a left-footed piledriver that doubled the hosts’ lead just before half time.

Artem Dzyuba got Russia’s third only seconds after coming on as a substitute in the 70th minute.

After that, Cheryshev cleverly steered home the fourth with the outside of his foot just a minute into injury time.

Aleksandr Golovin completed the visitors’ misery by curling his free kick beyond the wall in the the 94th minute to make it 5-0.

On Friday, Egypt will play Uruguay in a Group A fixture at the Central Stadium of Ekaterinburg. Morocco will take on Iran in a Group B match at Saint Petersburg’s Krestovsky Stadium.

Portugal will face Spain in a Group B encounter at Fisht Olympic Stadium of Sochi.