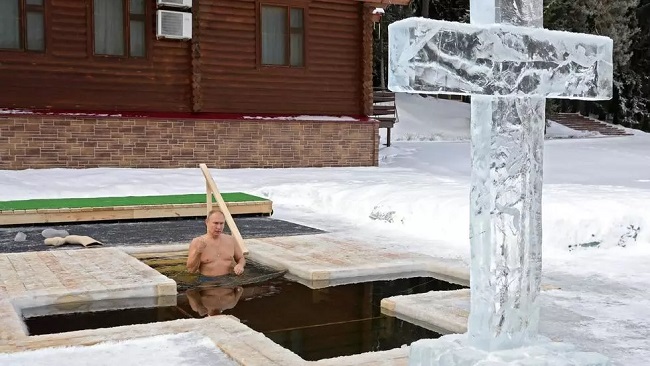 Russian President Vladimir Putin on Tuesday braved temperatures well below freezing to take a bare-chested dip into icy water in an Orthodox ritual marking the baptism of Jesus.

The Russian leader shed a thick coat and boots, as temperatures hovered at -20 degrees Celsius (-4 degrees Fahrenheit) and stepped into a pool surrounded by snow and facing a large cross made of ice outside Moscow.

The 68-year-old Russian leader immersed himself three times while crossing himself, in line with tradition.

The Kremlin said in a statement that the tradition “celebrates one of the main Christian holidays — the baptism of the Lord.”

Every year on January 19, tens of thousands of Orthodox believers mark Epiphany by dunking themselves in ponds or rivers.

Russian authorities install wooden steps to facilitate access for worshippers throughout the country wishing to commemorate the baptism of Jesus Christ.

While the ritual has become popular among Russian politicians and even foreign diplomats, the Orthodox Church has said the event is not actually a canonical tradition and dismiss it as a fad.