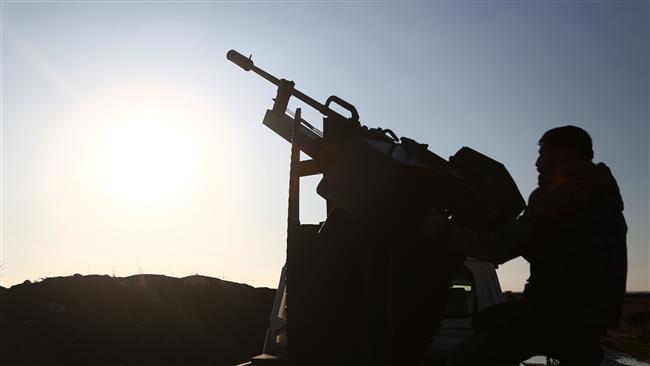 The Russian Defense Ministry has accused the US of fueling tensions in northern Syria by supplying arms to militant groups.

“The Pentagon’s uncontrolled deliveries of modern weaponry to the pro-US militants in the north of Syria contributed to the rapid escalation of tensions and prompted the Turkish special operation,” said a statement released by the ministry on Saturday.

The statement was released after Ankara began new air and ground operations around the area of Afrin in northern Syria aimed at ousting the Kurdish People’s Protection Units (YPG), which Ankara views as a terror organization and the Syrian branch of the outlawed Kurdish Workers’ Party (PKK).

The US’ “provocative actions” such as establishing “border forces” and other activities aimed at the “disintegration of Syrian sovereignty, and supporting armed militant groups” have resulted in Turkey’s “extremely negative” reaction.

A few days before the launch of Turkey’s northern Syria operations, Washington claimed that it was not supporting the YPG in Afrin.

“We are not operating in Afrin. We are supporting our partners in defeating remaining Daesh pockets along the Middle Euphrates River Valley, specifically in areas north of Abu Kamal, on the eastern side of the Euphrates River,” said spokesman for the US-led coalition Colonel Ryan Dillo.

Earlier in the day, the Russian Foreign Ministry released a statement voicing its concerns over Turkish military operations in Syria, in which it noted that Russian troops were withdrawing from Afrin “to prevent potential provocation and exclude the threat to the life and well-being of Russian military.”

Meanwhile, several Turkish military trucks carrying tanks and other armored vehicles have crossed the border into the Syrian city of A’zaz in northern Syrian.

The deployment started after Turkish Prime Minister Binali Yildirim announced that ground operations are expected to begin on Sunday.

Yildirim also said that Turkish “armed forces have started an air campaign in order to destroy elements” of the YPG militants in Syria.

The Turkish army also said in a statement that the airstrikes had struck 108 targets belonging to Kurdish militants, but it did not say whether the targets were all in Syria’s Afrin’s province.

According to an YPG spokesman, the air raids have killed 10 people, seven of whom civilians.

“Seven civilians were killed, including a child, as well as two female fighters and one male fighter,” said YPG spokesman Birusk Hasakeh, adding that the child was an eight-year-old boy.

Following Turkey’s Saturday night airstrikes on Afrin, the YPG announced that it had no choice but to fight back.

“We will defeat this aggression, like we have defeated other such assaults against our villages and cities,” said a statement.

While noting that Turkey was targeting civilian neighborhoods, the YPG called on the people of north Syria to unite and defend Afrin.