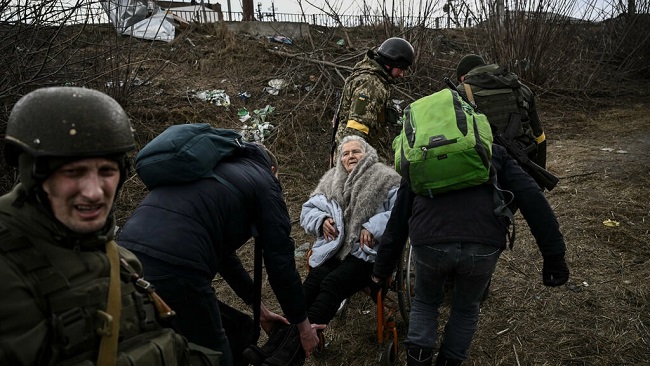 Here are the latest developments in Russia’s war in Ukraine:

Ukraine begins evacuating civilians from the northeastern city of Sumy under a deal with Moscow to set up humanitarian corridors out of cities besieged by Russian forces.

Dozens of buses ferry the evacuees to the city of Lokhvytsya, around 150 kilometres to the southwest in Ukrainian-held territory.

Kyiv had rejected a previous proposal to evacuate Ukrainians to Russia as a publicity stunt.

Moscow announces a ceasefire in the five cities worst-hit by the fighting: Chernihiv, Mariupol, Kharkiv, Kyiv and Sumy.

Previous such cessations of fire collapsed at the weekend, with both sides trading blame.

At least 21 people, including two children, were killed in air strikes on Sumy on Monday night, hours before the evacuations began.

Thousands attempt to board packed trains out of Odessa, Ukraine’s main port which is also bracing for attack.

People to rush to board trains out of the Ukrainian port of Odessa, which is bracing for attack

People to rush to board trains out of the Ukrainian port of Odessa, which is bracing for attack BULENT KILIC AFP

Chinese President Xi Jinping urges “maximum restraint” over Ukraine but stops short of condemning the Russian invasion in a video summit with the leaders of France and Germany.

A group of Lithuanians launch a bid to get Russians abroad to call 40 million of their compatriots and tell them what is happening in Ukraine.

Russia has severely restricted reporting of the war on its territory.

Energy giant Shell says it will stop purchasing Russian crude oil and shut down its operations in the country.

Russian designer Valentin Yudashkin, who designed the Russian army’s uniforms, has his show at Paris Fashion Week cancelled for his failure to condemn the war.

The World Bank approves an additional $489-million package for Ukraine, to be made available immediately.

Foreign footballers and coaches working in Russia and Ukraine will be allowed to temporarily suspend their contracts and move elsewhere, FIFA announces.