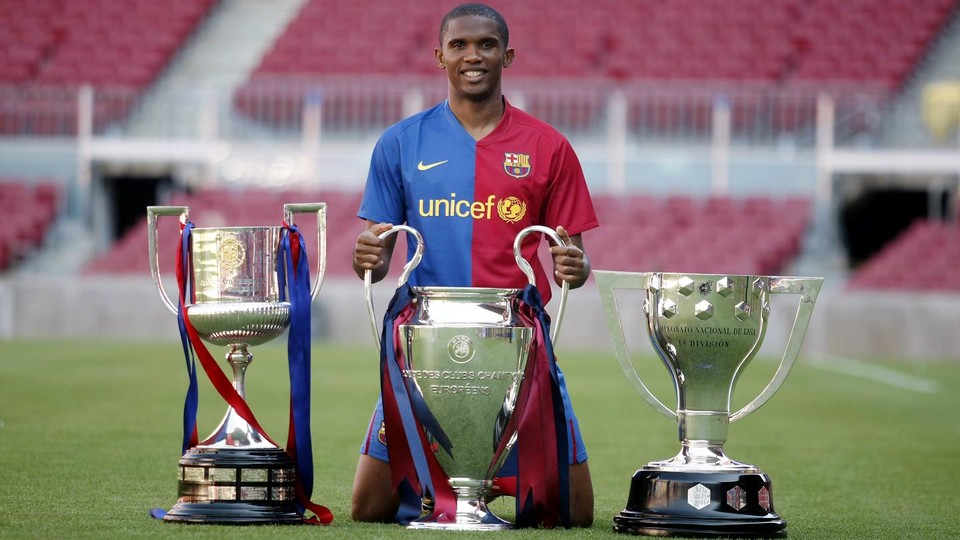 Samuel Eto’o enjoyed a glittering playing career which spanned 13 clubs and a whopping 22 years – but it wasn’t without its controversy.

After five years at the Spanish giants, he joined Inter Milan in 2009 where he won the coveted European crown for a third time – this time under the guidance of Jose Mourinho.

Short spells in the Premier League soon followed, with Chelsea and Everton among the 13 professional teams Eto’o represented during his memorable career before he retired in 2019.

And so, to celebrate Eto’o’s 40th birthday on Wednesday, Mirror Sport takes a look back on his incident-filled career…

Eto’o has never shied away from speaking out – and he previously aimed a sensational dig at former Barcelona colleagues Pep Guardiola and Lionel Messi.

With Guardiola at the helm between 2008-2012, the Catalan club were considered arguably the greatest club side of the modern era, winning three La Liga titles, two Champions Leagues and countless other honours.

But Cameroonian striker Eto’o felt his own role in their stunning run was underestimated and declared himself the man who “made Barcelona win”.

In an astonishing swipe at his former boss, the ex-Chelsea man blasted Guardiola for not understanding his squad and said Messi was far from the player he is today.

“Pep Guardiola has lived his whole life in Barcelona, but in the years I spent there he didn’t understand the squad. He didn’t live the life of our group,” Eto’o told beIN Sports.

“I said to Guardiola: ‘you’ll apologise to me because it’s me that will make Barcelona win – not Lionel Messi’.

“It was the situation back then. Messi would come later.

“You can ask Xavi, Andres Iniesta and all the others – that was my era. It was me that made Barcelona win and Guardiola would ask me for forgiveness.”

The criticism of Guardiola doesn’t stop there, either.

Eto’o helped Guardiola win his first Champions League as a coach in 2009, scoring the opening goal in the 2-0 win over Manchester United.

But the striker was ultimately forced out after just one season playing under the Spaniard – and it seems there was no love lost between the pair.

“I first of all reminded Guardiola that he’d never been a great player,” he said in an interview with beIN Sports .

“As a coach he had proven nothing, he didn’t even know the story of the dressing room.”

The Eto’o and Mourinho friendship is a strange one.

Before leaving Barcelona, the Cameroon star claimed he would never play under the Portuguese manager – only to then join him at Inter Milan a matter of months later.

The pair had an infamous bust-up following Barca’s 4-2 second leg defeat by Mourinho’s Chelsea in the last-16 of the Champions League in 2005.

After the defeat, Eto’o is believed to have told the boss: “I know you are a great person and a great coach. But in truth you are just a s***!”

But a respect soon blossomed between the pair and the striker played a starring role in Inter’s historic Treble-winning 2009/10 season, which included a memorable Champions League win.

Eto’o has since spoken of how he preferred Mourinho’s more personal touch as a manager over the approach of Guardiola.

The Cameroon legend is one of the few footballers fortunate enough to say that they played for both legendary bosses, turning out for Guardiola at Barcelona and later Mourinho at both Inter Milan and Chelsea.

When it comes to Mourinho, Eto’o said that the Portuguese is a much warmer figure than he is often portrayed as.

“He’s a person who’s upfront and when he doesn’t like something, he tells you. We both have strong temperaments and we understood each other well.

“He’s one of the best people I have found in football. People try to present him as controversial, but it’s a lie. What happens is that life, and football, is hypocritical and they prefer that to having honest people.

“Mou is a top guy. The other thing is that he only cares about the result. It’s his way of seeing football and in that sense he is the number one. Beating him at his game is impossible, you can never beat him.

“He’s a winner and a born leader. He spoke to you with the right words. He’s great.”

Beginning his professional career with Real Madrid in 1997, the striker failed to make the desired impact at the Bernabeu and was shipped out on loan to Leganes, Espanyol and Mallorca.

A permanent move to Mallorca followed in 2000, after an impressive loan stint, and it was there where he showed off his goalscoring prowess on a consistent basis.

Barca soon took notice and swooped for the Cameroon star – and he became a influential figure in a team which featureed the biggest stars in world football including Thierry Henry and Messi.

He then left Spain for the first time in his professional career, moving to Italy with Inter, before a switch to Russian side Anzhi Makhachkala followed two years later.

Eto’o then fulfilled a lifelong dream by moving to the Premier League, first to join Chelsea in 2013, before a one-year stint with Everton.

He then left England to return to Italy with Sampdoria, before ticking another country off his list by moving to Turkey to spend three years with Antalyaspor and a further season with Konyaspor.

The striker eventually brought the curtain down on his career with a final hurrah with Qatar SC.

Thirteen clubs in six countries, not bad going for a striker who is widely regarded as one of the greatest African footballers of all time.

Not only did the striker enjoy a memorable club career, but he also starred for his country.138225411899

After earning his first cap for Cameroon one day before his 16th birthday, he went on to score 56 goals in 118 appearances for his nation.

He helped his country win Olympic gold at the 2000 Games in Australia, while also starring as they won the Africa Cup of Nations the same year and two years later.

Eto’o was voted African Player of the Year four times, a joint-record he holds with Manchester City legend Yaya Toure.