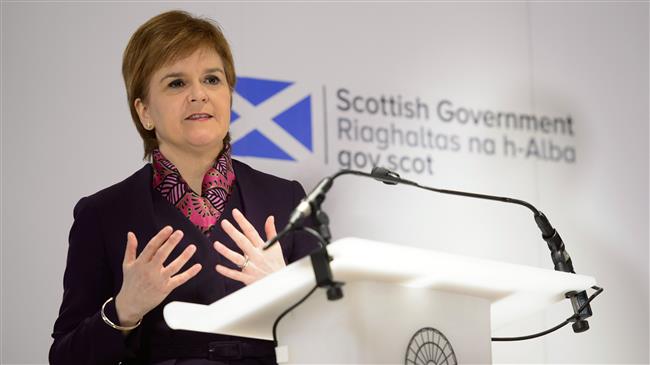 Scottish First Minister Nicola Sturgeon says Edinburgh will refuse to agree to London’s planned Brexit deal with the European Union, arguing that the exit bill would undermine the whole foundation on which the UK devolution system was built.

Sturgeon made the announcement in an interview with BBC Radio 4 on Tuesday, a day after the British government said it expected to reach an agreement with the devolved nations – Scotland, Northern Ireland and Wales – on how power would be shared after the Britain’s separation from the 28-member bloc.

“At the moment we have to exercise those powers within the confines of European law, but after Brexit, in terms of the devolution settlement, those powers should return to the Scottish Parliament and it should be up to us how we exercise them,” she added.

The Scottish first minister criticized the settlement and said London was trying to use the issue of Brexit in order to take control of devolved powers with the consent of the parliament in Edinburgh.

“Westminster effectively wants to be able to impose uniformity in these areas and that’s not acceptable in terms of the broad sweep and fundamentals of the devolution settlement,” Sturgeon said. “What the Withdrawal Bill seeks to do is restrict and constrain the ability of the Scottish Parliament or the Welsh Assembly to legislate in these devolved areas.”

Sturgeon noted that it is “very likely” the Scottish Parliament will not give consent to the exit bill unless the UK government changes its mind.

London needs a deal before the summer in order to pass the EU exit bill in the national parliament.

Sturgeon also warned on Tuesday that she retains “a mandate” to hold a second independence referendum if London tries to impose its will on Scotland.

Last month, Sturgeon accused the British government of a “reckless and irresponsible approach” in the negotiations so far, arguing London had entered talks with unachievable aims.