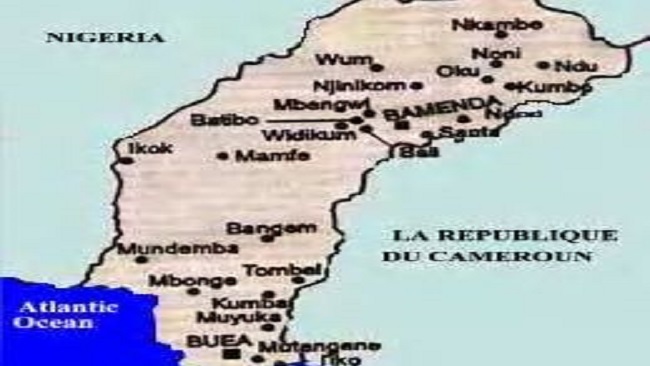 At least 45 Southern Cameroonians including women and children have been injured by soldiers loyal to the Biya Francophone regime in Yaounde on the Mamfe-Bamenda highway.

A Roman Catholic cleric cited sources in Kendem, Batibo and Bali as saying that 45 Southern Cameroonians were hit by bullets fired by Cameroon government troops fighting against Ambazonia Revolutionary Guards who recently blocked the main road linking Bamenda to Mamfe.

The prelate said that the 45 Southern Cameroonians had also suffered breathing difficulties due to inhaling French made tear gas used by the Cameroon government army soldiers against the Amba fighters in Kendem, Batibo and Bali.

The war in Southern Cameroons has created a business empire for top military officers in Yaounde. About forty thousand Southern Cameroons civilians have lost their lives in this war. More than a million persons have fled to Nigeria and other countries as refugees, and millions have been made IDPs. More than 600 towns and villages and countless homes have been burnt down by French Cameroun troops. Hundreds of females have been raped (a good number deliberately infected with HIV and other STDs), scores of children killed in targeted killings, food and food crops and livestock destroyed to impose conditions of famine, water sources defiled and polluted to provoke a pestilence, and mass graves punctuate the landscape.

Genocide, war crimes and crimes against humanity are being committed in the Southern Cameroons by French Cameroun military which systematically continues to kill women, teenagers, and even babies, the elderly, the infirm. Presidents Emmanuel Macron, Paul Biya and Buhari bears direct responsibility for these heinous crimes.

By Fon Lawrence with additional reporting from the Camcordnews desk