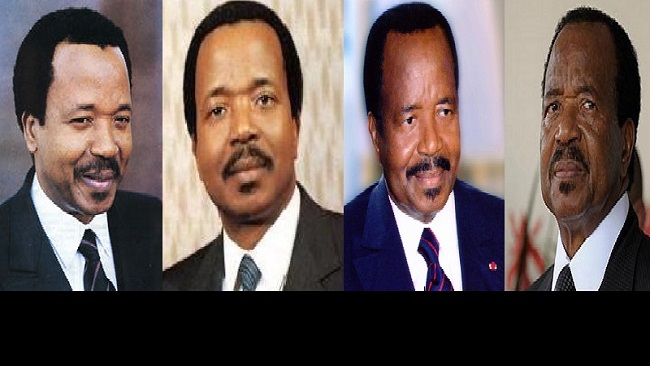 Southern Camerons Crisis: Biya is entirely disconnected from the state he presides over 0

President Paul Biya has become a master at dodging international forums, especially ones like the Commonwealth Heads of Government Meeting that usually cause some sense of discomfort.  The Biya presidency is indeed a crime syndicate in progress after 35 years as painted by the Cameroon Concord News Group.

Mr. Biya recorded yet another pitiful political performance by shying away from the recent Commonwealth Heads of Government Meeting that held in London. At 85, Biya has become a master at dodging national and international forums, especially ones with the potential of examining his continued stay in power. Last week, the Cameroonian dictator was conspicuously absent from the London meeting that was specifically going to address  Biya’s alleged role in the genocide currently going in Southern Cameroons.

All Biya has been saying is that he wants dialogue aimed at resolving the crisis in Southern Cameroons. It’s funny that Biya has been saying this for many months now and Cameroon government forces under his command have been slaughtering innocent Southern Cameroons civilians.  In both the so-called Senate and the National Assembly, Biya has made it impossible for debates to be held on the Southern Cameroons crisis. Of course Biya thinks the crisis will end anytime soon and his evil machinery will stay on top. It is not surprising then that Biya is dragging the matter out by appointing very unpopular Southern Cameroonians and ordering them to supervise the killings of their own people. Surely he has no appetite for anything Anglophone.

Cameroon Concord News Group understands that even French speaking Cameroonians are helpless as the remains of their loved ones keep arriving home, killed in the Southern Cameroons war. There is no key institution that can be exploited in holding Biya and his gang to account and the president in particular.  Mr. Biya himself has blatantly refuse to provide as much information to French speaking Cameroonians or, alternatively, at least show sufficient respect for state institutions ever since the Southern Cameroons crisis started some close to two years ago.

Biya and his men are not speaking about the crisis and have all maintained a kind of deliberate silence and this tactics has gotten us no closer to the complete answer sought in striking a compromise with the Interim Government of the Federal Republic of Ambazonia.

Biya’s new Minister of Territorial Administration, Paul Atanga Nji has of course taken evading questions to new levels. Last week, CRTV’s Ibrahim Sheriff put a range of their own CPDM sweetheart questions to him, providing him with plenty of room to discuss matters such as the extradited Ambazonian leaders and the way forward in resolving the crisis. The questions were so basic that Atanga Nji was allowed to rattle off Biya achievements informing the world that the leaders were putting on weight due to the quality of food being served to them in detention.

President Biya himself is implicated in corruption and none of his disgraced and detained cabinet ministers have ever appeared before the National Assembly to answer questions regarding nepotism and corruption. Biya only fire those who want his job or any of the ministers who have something to offer the Cameroonian people in terms of development and job creation.

No CPDM media guru is allowed to ask President Biya questions directly related to the Southern Cameroons crisis or statistics about unemployment and poverty or about his role in self-sabotaging the economy. In a nutshell, Biya’s management style displays reckless disregard for the people of Cameroon.

Here is a president who has failed woefully to understand the gravity of his actions when he declared war against Southern Cameroonians.  Indeed, French Cameroun political elites are facing many challenges and the Francophone dominated economy is especially fragile, so why exacerbate the situation by appointing two compromised, inexperienced Southern Cameroonians to the ministries of Territorial Administration and Secondary Education? The answer is obvious now that we have more armed groups coming up in Southern Cameroons and more killings on both sides of the political divide.

It has become clear that Biya is entirely disconnected from the state he presides over and the citizens he is meant to lead. He is now wholly focused on ensuring that his children’s Swiss bank accounts are full to the brim. Biya has no other goals for the Cameroonian people.

Parliament itself has become like a Roman spectacle with both CPDM and opposition MPs only interested in collecting their salaries and car allowances.  Biya is indeed a criminal unable to command the respect of his people, given that he is implicated in so many scandals.

There is an urgent need for French speaking Cameroonians to change tack and strategy and start putting the penetrating questions to the Francophone army to get rid of this monstrous liability of a head of state.