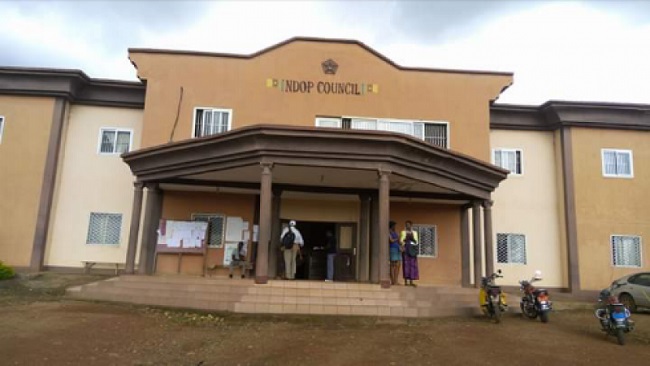 Dr. Ntoh Daniel Balengka, Mayor of Ndop Council has said all those respecting orders from “armed separatists and bandits” will face the full arm of the law henceforth.

In a communiqué signed Friday, May 29, 2020, the Mayor revealed that a vast majority of economic operators in Ndop, the administrative seat of Ngoketunjia Division have chosen to respect instructions from armed gangs who seek to make of Cameroon’s North West and South West Regions a breakaway state called Ambazonia.

Ntoh said the business persons have gone to the extent of supporting the armed groups through the payment of levies – “Amba levies”.

Earlier this week, the Mayor took his collaborators and security officials to seal shops of persons who chose to respect a routine Monday ghost town call imposed by armed separatists. The Mayor says enough is enough, promising to return fire for fire.

Following the sealing of the shops, the Mayor says “some armed robbers” launched “intensive media propaganda” against the council. Friday’s communiqué therefore set out to make clarifications on the situation.

“Almost all the business premises (99.99%) in Ndop Municipality including the main market and motor parks are not sealed,” said Mayor Ntoh. “Only a few shops of suspected adepts of armed/terrorist movements were sealed for violating a Municipal Order banning “Operation Ghost Towns” owing to its misery and atrocities, after sufficient sensitization of the business community.”

The Mayor says all those whose shops were sealed were requested to meet him so they can discuss and have the said premises unsealed. “Even without fines where necessary, but they preferred to follow the directives of these armed groups to demonstrate their non-recognition of the authorities.”

Ntoh says a vast majority of business persons and transporters violate state authority to the extent of ‘financing’ the armed men.

His words: “Despite the declared tax moratorium by the Mayor of Ndop Council for all businesses and transporters for the rest of 2020 financial year, as accompanying measures of the negative impact of the COVID-19 pandemic, the vast majority of economic operators in Ndop have decided not to go operational in solidarity with the calls from these armed gangs and continue to subsidize their activities with the so called “support” – ‘Amba levies.”

The Mayor of Ndop Municipality once more appeals on the civic responsibility of the population, to carry out their normal daily activities unperturbed.