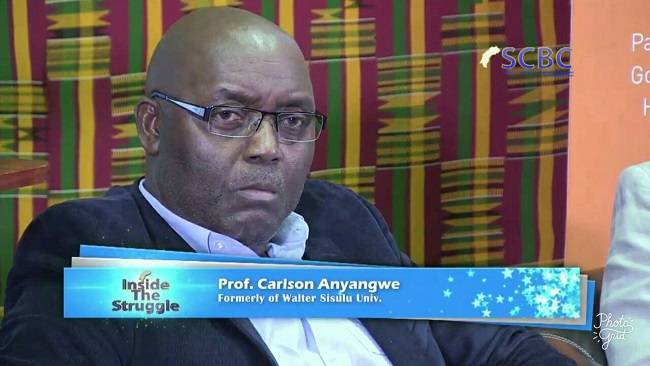 A senior Southern Cameroons leader Prof Carlson Anyangwe has reacted to the latest remarks by the Francophone governor of the South West region Okala Bilai about holding dialogue among Ambazonian families emphasizing that the people of Southern Cameroons should immediately dismiss the call for family dialogue with French Cameroonians that are targeting and killing them on a daily basis.

The Southern Cameroons veteran leader was quoted as saying that “Ambazonians hate wars, hate attacks by French Cameroun army soldiers and their Atanga Nji Boys, as well as the call for peace with aggressors who are killing them every day,”  Southern Cameroons Broadcasting Cooperation (SCBC TV) reported.

He added, “The hatred for French Camerounians and their invading military will end in the Federal Republic of Ambazonia as soon as its aggression stops, French Cameroun civil administrators withdrawn and an international peace conference held in a neutral country to determine the terms of separation. This is what the Ambazonian Leader and President of the Southern Cameroons Interim Government Sisiku Ayuk Tabe has long been demanding,” Prof. Anyangwe pointed out.

Professor Carlson Anyangwe’s remarks come as all efforts and collective action at the international level for establishing peace and ending the imposed war have failed.

The arrogance on the part of the Biya Francophone leadership in Yaoundé is hurting the two Cameroons. By not listening to the people, the Francophone dominated regime authorities have created a very nasty situation that might result in the splitting of a country that is expected to be a good example to other countries on the continent.

Arrogance could be a very bad ally if not well managed. It could result in self-destruction and excruciating pain. This is exactly what is happening in French Cameroun wherein appointments, even those negotiated in the most difficult circumstances, are seen as a sign of intelligence.

This mentality is consuming French Cameroun political elites and it is generating conflicts and giving tribalism a chance to rear its ugly head. The United Republic of Cameroon, once an oasis of peace in a desert of peace, is falling apart.

Disagreement is as old as time and negotiations are the easiest way to bring about peace and security when people disagree. This philosophy has been embraced by many around the world but the Yaoundé government seems to be frozen in time. It is stuck in the past and it clearly holds that the old tool in its toolbox that can bring about peace in the country is military violence.

But the government’s principle on peace-building and nation-building seems to clearly belong to the past. Its monopoly of holding weapons and spreading falsehood has been shattered by new technologies also known as technologies of freedom.

By Chi Prudence Asong with additional reporting from Soter Agbaw-Ebai