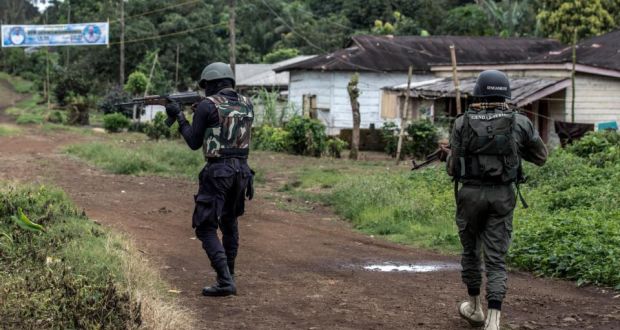 Southern Cameroons-Ambazonia: ‘People were shot without any reason’ 0

The road to Buea, in Cameroon’s anglophone southwest region, is lined with abandoned banana and rubber plantations. Traffic is flowing, cars and yellow taxis interspersed with the occasional armoured pick-up full of elite soldiers clad head to toe in Israeli gear, positioned back to back with rifles at the ready to shoot rebel “Amba Boys” hiding out in the bush.

Mile 16, a busy area of Buea, is on edge. The previous day, the “Amba Boys”, who are fighting to create a nation called Ambazonia, separate from majority francophone Cameroon, had snuck past the heavily-armed soldiers of the Rapid Intervention Battalion (BIR). They dragged a couple of drivers from their cars, torched the vehicles, then dashed back into the bush. All in broad daylight.

On the surface at least, all is quiet again. In Mile 17, locals are selling phone credit, loaves of bread and carefully-arranged piles of plum tomatoes. Schoolchildren in blue uniforms walk by, a supposed sign that what some call the “anglophone problem” and others call “the war” is subsiding. Semantics can have a blurring effect, but the numbers don’t lie. Caught in the crossfire, more than 437,000 people have fled their homes, according to UN data, many now trapped in the bush. Hundreds have died.

Many here will tell you the conflict is not a simple matter of English versus French, not in a land of more than 250 languages that uses “Camfranglais” as a lingua franca. Whatever the language, frustration with the seemingly eternal regime of president Paul Biya – in power 43 years, if you count his terms as prime minister and president – is a nationwide affair. But the colonial heritage of a distinct system has made the anglophone uprising the most organised and potent threat to the recently re-elected president’s cast-iron grip on power.

Reputedly paranoid since a 1984 coup attempt, Biya brought out the big guns two years ago, when teachers and lawyers in the anglophone northwest and southwest regions protested against government attempts to push the use of French in their classrooms and courts. Government forces responded with indiscriminate shooting from the air and on the ground, locking up moderates labelled as terrorists and sealing the territory off from the world with a six-month communications blackout. By August this year, 92 villages had been burned and completely deserted, according to the Buea-based Centre for Human Rights and Democracy in Africa (CHRDA).

The brutal response mainstreamed separatist sentiment that had been simmering since the early 1960s, when the British-administered Southern Cameroons were denied independence, folded instead into newly-independent francophone Cameroon. In the nearly six decades that have followed, the country has had only two leaders: old-school tyrant Ahmadou Ahidjo and the post-modern, diplomatically-savvy Biya, described as a “strong autocrat” by one uneasy foreign envoy in Yaoundé. Over that time, anglophones have been subjected to the steady creep of assimilation into a heavily-centralised francophone system.

Funded by anglophone exiles in the US and Europe who had fled repression, thousands of locals armed with homemade muskets organised themselves “block by block” – in the words of Cho Ayaba, a separatist leader who spoke to The Irish Times by phone from Norway – to defend their communities.

Viewed as protectors by many, the “Amba Boys” have, however, been guilty of atrocities, chopping off the fingers of plantation workers on state-owned farms, torturing teachers defying a school boycott and killing those suspected of collaborating with the military. “Like a lion eating its own cubs,” says one preacher, who does not support the “Amba Boys”, even if he believes in independence “in my spirit”.

Then there are the kidnappings, most notably November’s Boko Haram-style seizure of 78 schoolchildren and three staff members from a Presbyterian school in Bamenda, in the northwest – a controversial subject here. It took place during a strictly-enforced dusk to dawn curfew, causing many to question how the large group cleared checkpoints on their 19km journey to the town of Bafut. In Yaoundé, the consensus among diplomats and other international observers is that the separatists, who have denied involvement, are guilty. But in Buea, where people speak of “real Ambas” and “government Ambas” – agents provocateurs sent in to stir trouble – the jury is still out.

Kehdinga is one of the few people in Buea who spoke on record. In November, anglophone journalist Mimi Mefo Takambo was arrested on charges of fake news for sharing a report on social media suggesting government forces were responsible for the recent shooting of an American missionary on the outskirts of Bamenda. A government statement claims the autopsy revealed pellets came from a “sneaky terrorist”. Joined by phone after her release, Mefo is still shaken. “The impression they were trying to give is that I was supporting terrorism. I was just doing my job, reporting what was happening on the ground,” she says.

Mefo has been targeted by both sides for her reporting, one of many caught in the middle of the conflict. Human rights lawyer Agbor Balla Nkongho, director of CHRDA, was jailed for eight months after leading the peaceful protests that sparked the conflict. But he has also received death threats from separatists, most recently for helping religious leaders to organise a yet-to-be scheduled peace conference aimed at kickstarting dialogue. Separatists believe the event is a stealth attempt to seek a federalist solution. He still lives in Buea. “If I leave, people will lose hope,” he says.

Defence spokesman Col Didier Badjeck believes the government is back in control, harking to recent raids in which dozens have been “neutralised”. Denying accusations of civilian killings, he rails against human rights groups like Amnesty (which has documented abuses on both sides). But eyewitnesses, who have fled devastated villages like Wum in the northwest and Mbonge in the southwest, tell the same story over and over again to The Irish Times. The locations change, but the grief and terror remain the same.

The conflict ebbs and flows, each fresh horror masked by a hyper-vigilant semblance of normality. At the foot of Mount Cameroon, in the neighbourhood of Federal Quarters, a man and a woman are sitting in the shade of a tree. The woman flinches as I approach, gathering her toddler in her arms. “If I talk they will come here and they will shoot me,” she says, looking nervously at passing cars. “The government will come to my house.”

But the man stands up, offers me a seat. John (not his real name) is a man with nothing to lose.

His mother, father, three brothers and two sisters fled the village of Ekona after their houses were burned. Now they are all hiding in the bush. “They are scared of the military. People were shot without any reason,” he says. “On market days they come back to the village for food then leave immediately.” He is supporting the entire family on his meagre cleaner’s salary.

In his view, the “Amba Boys” were protecting their communities. “Those boys got arms and were prepared to defend themselves. The military shot them. They had to retaliate,” he says. “From there the president named them terrorists. When he said that, he declared war on his own people.”

“I’m no more afraid of anything,” he says, chin raised defiantly. “I believe in independence.”

Culled from The Irish Times