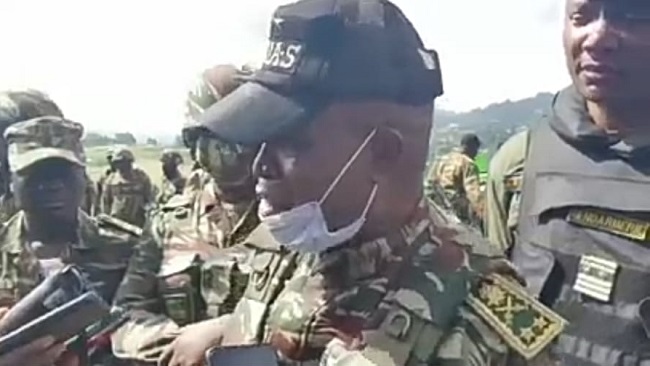 Several Cameroon government army soldiers have been killed recently in Southern Cameroons and the sad reality is reportedly creating tension within the military hierarchy in Yaoundé.

Senior intelligence officers of the Cameroon government army have accused General Valere Nka the head of the military operations in Southern Cameroons of systematically manipulating operational intelligence reports following directives from some politicians who are benefitting from the war.

Cameroon Intelligence Report gathered that the situation in Southern Cameroons is deteriorating at catastrophic rapidity and all the more serious because several army officers are now saying that the number of soldiers who died ever since the 88-year-old President Biya declared war against British Southern Cameroonians is much higher than those published officially. A source deep within the Francophone dominated army was quoted as saying that the practice of manipulating the military death toll was adopted by the ruling CPDM crime syndicate in order not to demoralize the troops.

In addition to this developing scandal, there is also the matter of choice of army soldiers deployed to Southern Cameroons.  The Francophone Beti Ewondo military hierarchy is accused of protecting their blood relations preventing them from being sent to Southern Cameroons while other ethnic minorities within the Cameroon government army are deployed regularly with some having spent two years on the Ambazonian front line.

In order to calm the tension on the ground, General Nka Valere has been urgently summoned to the Ministry of Defense to explain himself to Defense Minister Beti Assomo.

The fighting in recent weeks has caused huge casualties on both sides and the losses in the ranks of the Cameroon government army are beginning to have a negative impact on the troops with hundreds of defections now being recorded.

A video posted on social media by a group of Cameroon government soldiers deployed to Southern Cameroons gave the world an insight into the difficult situation confronting the troops. The soldiers were heard denouncing their comrades who have deserted the army and even opening accusing senior officers of corruption.