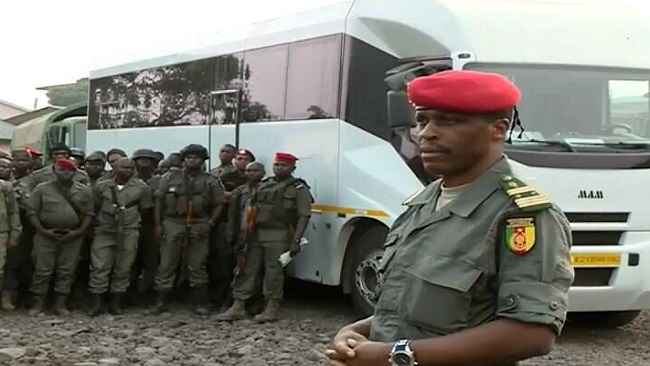 Southern Cameroons Crisis: Cameroon army is so broken; its soldiers are refusing to fight 0

As Cameroon government army soldiers battled Ambazonia Restoration Forces over the past four years, dozens of soldiers are now refusing to fight and their cases have opened a rare window into the much respected Cameroon military, once one of the strongest in Sub Saharan Africa but now struggling to combat an ill-equip Southern Cameroons Self Defense Force of not even 2000 fighters.

Cameroon Concord News undercover reporter in the South West shared a conversation today with Cameroon government army soldiers who are petrified of their next assignment. Military commanders have told the soldiers that they will be deployed to Lebialem, Manyu, and Ndian constituencies in the South West over the next few days.

Five of the soldiers (names withheld) said they have lost weight from sleepless nights and disproportionate thoughts over the last few days. Three of the men were visibly troubled after being told that they would be assigned to patrol the dangerous landscapes of Akwaya in Manyu over the next four months. One of the soldiers said, “My son is six, and my daughter is two, and there is a good chance I’ll never see them again. I don’t want to go there as two of my colleagues were brutally murdered by ruthless Amba boys in 2019”.

The young soldiers would either go to the warfront or face the military courts for sedition and rebellion. One of them said that many of his colleagues were bribing superiors to evade being posted to the treacherous jungles of the Southern Cameroons. A corporal, who has been assigned to Lebialem Division told Cameroon Concord News that “Tomorrow, I will faint and pretend that I am unwell as I have no money to bribe my way out of this. If I am declared medically unfit, they will not send me to an early grave. Even within the military, we all know that we cannot win this war, but we must fight because our bosses are making money from it.”

The prevailing situation deep within the Cameroon government military as painted for us by a 25-year-old soldier is even more pathetic. He said he has been around Buea to learn how to say some few words in English and pidgin as being a Francophone in Akwaya Sub Division will be a death sentence on his head. He furthered that he now knows how to say good morning, which may help him stay alive.

Since 2016, Southern Cameroons pro-independence fighters have been engaged in a fierce war against the government of Cameroun. The conflict has claimed over 40,000 civilian lives and more than 2000 Cameroon government soldiers.

The regime in Yaoundé, led by 88-year-old octogenarian, Paul Biya has ignored all calls for inclusive dialogue despite wise counseling from the international community and experts to negotiate with the pro-independence movements and forces.

At the time of filing this report, 13 Cameroon government army soldiers were on drip at the Regional hospital in Buea pretending to be very ill but at night they will be in the bars drinking beer. A soldier from the South Region pretended that he had collapsed by putting his tongue outside faking illness when his name was called that he had been deployed to Eyumojock.

Some of the Francophone army soldiers have two national identities-one bearing Manyu names to hide their Francophoneness. Another soldier successfully got himself out of the Manyu and Lebialem deployment by producing a fake death certificate and funeral programme of his mother who our sources hinted passed away nine years ago.