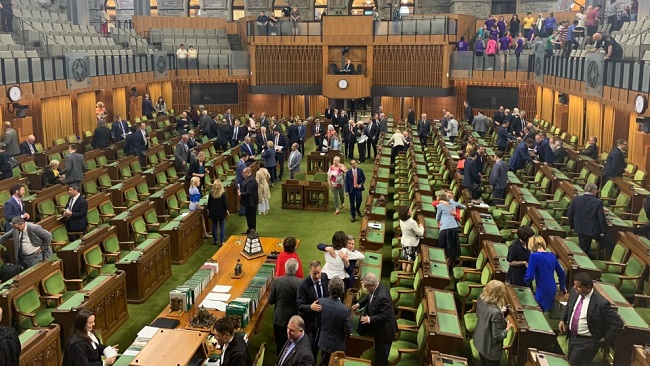 Southern Cameroons Crisis: Canadian House of Commons weighs in, says there is no end to hostilities in sight.” 0

On 16 February 2021, the Subcommittee on International Human Rights of the House of Commons Standing Committee on Foreign Affairs and International Development (the Subcommittee) heard from witnesses who gave members an update on the conflict between the Government of Cameroon and the English speaking regions of the Republic of Cameroon that has been escalating since 2016.

The Subcommittee last held a meeting on this topic on 13 June 2019. Its subsequent news release shed light on a host of human rights violations in the country perpetrated by the Cameroonian government. The Subcommittee concluded that since the root causes of the crisis continue to be ignored, “there is no end to hostilities in sight.”

Tragically, the situation in Cameroon has not improved. As summarized by one witness:

In the northwest and southwest regions, it is nothing short of an atrocity situation, consisting of widespread and systematic crimes against humanity against the civilian population and serious violations of international humanitarian law or the laws of war against civilians as protected persons, amounting to war crimes.

Witnesses, including an academic and people with regional experience, shared horrific stories of mass killings, forced disappearances, torture, burning and the worst forms of sexual violence. Since 2017, more than 700,000 civilians have been forcibly displaced from their homes, with over 60,000 refugees fleeing to neighbouring Nigeria.

The Subcommittee is particularly worried about the impact of this conflict on children in primarily English-speaking regions of the country. Not only are they witnessing the violence, but they are subject to it and concerns were raised that they are being recruited as child soldiers. Witnesses reported that between 800,000 and 1.1 million children have been out of school since 2017.

Witnesses lamented the fact that this is a neglected crisis. The international community cannot continue to stand idly by while atrocities in Cameroon continue unabated. The Subcommittee shares the view of witnesses that the situation needs urgent attention – with no end to the conflict in sight, Cameroon’s divisions are becoming increasingly entrenched.

The Subcommittee agrees with witnesses that, as a member the Commonwealth of Nations and the Francophonie alongside Cameroon, Canada could play a stronger role in helping to end this crisis. As such, the Subcommittee shares the view that the Government of Canada should rally allies through multilateral organizations to call for an immediate ceasefire and end to hostilities. It should mount an international campaign pressuring the Government of Cameroon to allow the establishment of an independent fact-finding commission of inquiry to investigate the conflict, including the atrocities and its root causes. The Government of Canada should also consider, alongside international allies, sanctioning those responsible for atrocities and severe human rights violations through the Justice for Victims of Corrupt Foreign Officials Act (Sergei Magnitsky Law).