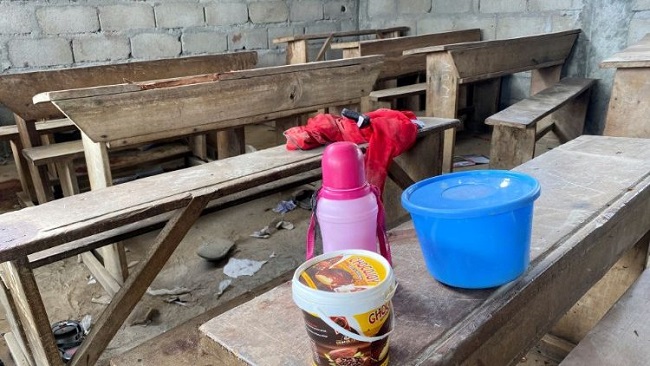 Southern Cameroons Crisis: Church in Bamenda grieving the killing of students and teachers 0

Cameroon’s Bishops of the Ecclesiastical Province of Bamenda have denounced the heinous murder of four students and a teacher of Government Bilingual High School Ekondo Titi, South West Region of Cameroon.

In a statement signed by the Archbishop of Bamenda on behalf of other Bishops, Andrew Nkea, the Bamenda Provincial Episcopal Conference (BAPEC) expressed its deep distress at the cruel killings of students and a teacher on Wednesday, 24 November 2021.

The brutal killings of students and teachers

“Our hearts have been pierced again! In recent times, we have painfully witnessed an agonising drama involving, among other evils, the targeting and killing of pupils, students and teachers … We have hardly recovered from the cruel killing of Enondiale Tchuengia Carolaisse (a class one pupil) killed in Molyko-Buea on Thursday, 14 October 2021, and the brutal killing of another pupil, Brandy Tataw, on Friday, 1 November 2021, in Nkwen-Bamenda, than we are confronted again with the killing of four more innocent Cameroonians within the protected area of a school,” said Bishop Nkea.

Explaining the tragic attack on the school by gunmen, Archbishop Nkea said, “On Wednesday, 24 November 2021, some persons armed with guns and explosives, invaded the premises of Government Bilingual High School Ekondo Titi and shot and killed three students: Emmanuel Orome (12 years), Joyceline Ikem (16 years), and Emmanuel Kum (17 years); and a teacher, Celestine Song. These innocent victims are not the cause of the socio-political crisis, and their deaths cannot be the solution. Their murder is totally senseless and unacceptable,” said the Archbishop of Bamenda and President of the BAPEC.

A fourth student later died at a local hospital bringing the total number of victims to five. Seven students wounded in the attack are receiving treatment in hospitals around the city of Buea.

Dialogue and not violence is the solution

The Bishops of the Bamenda region have appealed for the respect of life and more state protection.

“We, the Bishops of the Ecclesiastical Province of Bamenda, condemn these barbaric acts, which violate all International Laws and Conventions safeguarding the inviolability of schools and the protection of learners (pupils and students), and teachers, offend against the fundamental right to education, and breaks the Fifth Commandment of God … We have been persistent in our call for the respect and defence of human rights, especially the right to life, openness to dialogue, an option for the truth and recourse to peaceful means as the best way to a durable solution. While calling on the Government to ensure the security of schools, we make a special appeal, once more, to all perpetrators of violence to allow the genuinely human feelings of love, pardon and benevolence to flow into their hearts so that the safety and security of all may be guaranteed, alongside the right of all young people to life and to an education and a future,” the prelate of Bamenda said.

According to Cameroonian authorities, the armed attacks on schools scare teachers and students from institutions thus dealing a devastating blow on learning. Local government officials have pleaded with the children’s parents and teachers in the region not to abandon the schools.

Ekondo Titi’s senior government official, Aboloa Timothe, promised heightened security to protect schools, teachers and students from further attacks. Given the many incidents in several parts of the region, it remains to be seen how this will be done, in practical terms. Observers say that there have been more than ten armed attacks on schools in the English-speaking regions in the last few month alone. The exact figure is unclear, but more than 10 children have been killed and several teachers and students wounded.

The Anglophone crisis: A neglected conflict

It is a brutal ‘low level’ armed conflict that has been happening for the last five years in Cameroon’s western Anglophone regions. Cameroon’s military has been engaged in an armed conflict with separatist rebels, the Amba boys, who want the Anglophone areas to break away from the Francophone country. Education has been weaponised as the separatists enforce a boycott of schools. UN rights agencies have accused both the rebels and Cameroon’s military of killing civilians and widespread human rights violations.