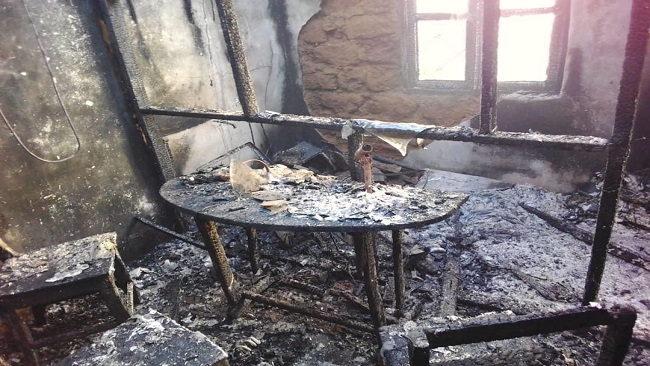 Cameroonian authorities should speedily investigate an alleged arson attack on community radio station Sky FM in the volatile Northwest region and ensure those responsible are prosecuted, the Committee to Protect Journalists said today.

The radio station is based in the town of Ndu, about 124 km (77 miles) from Bamenda, the capital of the Northwest region–one of two regions where Anglophone separatists have been waging an armed struggle for an independent state called Ambazonia against the predominately French-speaking government of President Paul Biya, according to news reports. A recent Human Rights Watch report blamed both sides for grave abuses against civilians, including killings.

“All parties to the conflict in Cameroon, whether government forces or Ambazonians, should stop targeting journalists and media organizations and allow them to operate safely and without fear of reprisal,” said Angela Quintal, CPJ Africa Program Coordinator. “The media is not the enemy. Journalists are simply trying to do their jobs by ensuring that citizens are armed with useful information in what has become an increasingly bloody phase in Cameroon’s history.”

Borno told CPJ that he learned of the fire the morning of August 4 when the manager of the nearby Summit Hotel, Nformi Victor, called him to tell him that the radio station had burned down. According to Borno, Victor told him that a hotel receptionist heard a noise at about 11 p.m. the night before; she did not investigate further since she did not hear the noise again and because it was windy.

Sky FM’s station manager, Bernard Tata Gibip, found a cutlass, gasoline container, and a box of matches near the radio station after he too was alerted by Victor, Borno told CPJ.

The station broadcasts in English and “all other local languages including Limbum and Mbororo,” on topics including culture, health, and the economy, according to Borno, who is a local official of Biya’s ruling Cameroon People’s Democratic Movement party. The station also broadcasts BBC programs and national broadcasts in French.

Borno told CPJ on August 7 that he believed his radio station was targeted because of its “Back to School” campaign, which began last year encouraging students to return to school. The new school year starts in September, and a school boycott has been in place since November 2016 when lawyers and teachers in both the Anglophone Northwest and Southwest regions began protesting the alleged marginalization of English by Biya’s central government in Yaounde, according to news reports. The grassroots protest was then taken over by separatist factions as the conflict escalated with Amnesty International and Human Rights Watch accusing them of violently enforcing the boycott, according to the independent humanitarian news website, IRIN.

The station has been off air since May 19 after its two transmitters were damaged in a lightening strike; they were planning to relaunch the week of August 8, according to Borno.

Borno told CPJ that because the new school year starts next month, the “separatist activists know very well our stand so they decided to burn the entire radio house with all equipment.”

In a detailed emailed statement to CPJ, a spokesperson for the separatists’ Self Defense Council of the Ambazonian Interim Government (ASC), A.J.N. Mbiydzenyuy, said it controlled about 98 percent of the “restoration forces”– who are the self-defense units of the separatist Ambazonia movement– in the Northwest and Southwest regions and that there was no evidence that they were responsible for the arson attack.

“The ASC leadership has never approved [an] arson attack, the restoration forces council in Nkambe is unaware of any involvement of their forces…and the field commanders of our forces in Ndu declined responsibility of the FM radio station arson attack,” he said.

CPJ could not verify independently the alleged motive or whether separatists were responsible for the alleged arson.

Ndi, the publisher and editor-in-chief of the weekly NewsWatch, told CPJ that both the government and separatists were targeting journalists. “Separatists are threatening us with messages that we are siding with government in our reports as we try to stay neutral or objective in the crisis. On the other hand, any report that seems to be propagating the agenda of the separatists is tantamount to the crime of ‘apologies de terrorisme’ punishable under the anti-terrorism law by the government,” he said.

Borno said he employed four staff members to report and produce programs. He said that the station, which he established in 2013, was not a profit-making enterprise, nor was it subsidized by the government.

In a Cameroon special report about the abuse of anti-terror laws against journalists published last year, CPJ spoke to journalists who said they were increasingly caught between the Cameroonian government and separatists.
Source:CPJ