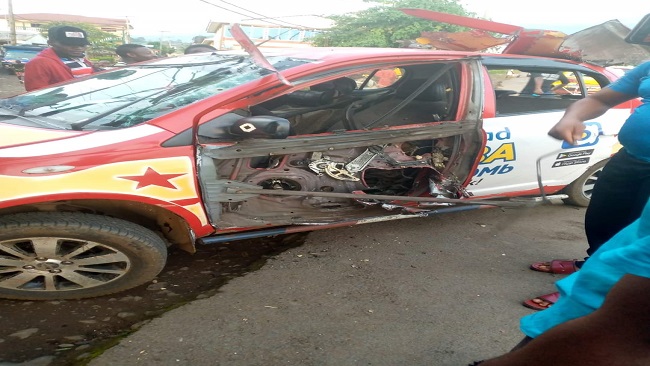 An improvised explosive device (IED) has gone off in Buea, Southwest region of Cameroon, riddling a taxi that was packed at the popular checkpoint where a five-year-old girl was killed some weeks ago and sending the taxi driver to a local hospital. No other casualties have been reported.

The explosion occurred today as the entire Southern Cameroons is observing ghost town orders. Ghost towns have been in effect for almost five years as a measure designed by separatists to cripple the government.

It should be mentioned that Southern Cameroonian separatists are seeking the total independence of Southern Cameroons from the Republic of Cameroon which uses French as its official language.

According to a separatist fighter who elected anonymity, the IED that went off today in Buea was intended to remind residents of the city that they must respect the rules set by the separatists.

The separatist who called Cameroon Concord News Group said “we must enforce the law. Ghost towns mean ghost towns. Today’s explosion is simply a reminder to those who think they can change the rules.”

“We targeted the taxi because the driver thought he was above the law. This is Southern Cameroons and we will be in charge of this territory till further notice. Anybody who does not like our determination to bring justice and prosperity can move to another country. La République will be happy to receive such a person as he or she will only be one more slave who will serve the arrogant and heartless masters in Yaounde,” he said.

It should also be reported that today’s incident occurred just a few days when a Southern Cameroons delegation of explosives experts left the country after training the fighters on how to manufacture deadly explosives and how to place them for greater impact.

A member of the delegation had informed the Cameroon Concord News Group’s editor in London that the fighting in the two English-speaking regions of the country would enter a new phase and explosives would be going off even in civilian locations to warn anybody who thought the insurgency was losing steam.

He added that the fighters were prepared and equipped to take the fight to the enemy, stressing that the Francophone majority must be dragged into the fighting by spreading fear and death.

He pointed out that the people in the South and Center regions of the country already knew how painful it was to lose a loved one because most of the soldiers killed in the battlefield were from those two regions of the country, adding that the worst was yet to happpen as death might now be coming their way as a mushroom cloud.

In recent years, Cameroon has become totally insecure, creating fear among the population that the country might become the next Zaire once the country’s president, exits the political scene or the world. The country’s crime rate has been on a steady increase, with women and children being the primary victims. Unemployment is on the rise and killings have increased across the country as the economy continues its unfortunate downward slide to total chaos.

In Mamfe today, there are reports of heavy gunfire, with many residents suggesting that the Yaounde government is incapable of restoring peace and security.

An 80-year-old woman in Mamfe has called his son who lives in Europe to indicate that she would be better off living out of Cameroon because of the escalating violence that is spreading across the country like wildlife.

The lady, whose name has been omitted for fear or reprisals, expressed her desperation and frustration by weeping over the phone, adding that at her age, she should be living happily in her native country, but the recklessness, incompetence and greed of the country’s leaders had set Cameroon on the path to an apocalypse whose consequences would endure and linger for a long time.

This new escalation of  violence comes at a time when the various factions in the war are meeting in Toronto, Canada, to find a way out of the conflict that has already consumed more than 10,000 lives, with soldiers accounting for more than 35% of the deaths.

The choice of Canada is only appropriate. Canada has always wanted to help broker a long-lasting agreement, given its own experience with minorities and its own version of democracy and federalism have brought solid peace to the country and generated wealth for all Canadian citizens regardless of their language of communication.

Toronto is also ideal for the meeting because it is the heart of the country’s private sector where much of the money that is financing the fighting in Cameroon comes from. Over the last twenty years, thousands of Southern Cameroonians have settled in the Greater Toronto Area, with many involved in various businesses which have transformed them into dollar millionaires.  They think they should participate in their country’s politics but the government’s greed and refusal to accept dual citizenship is robbing them of their dream.

Though there is no visible Cameroon government participation in the Toronto meeting, sources close to the Cameroon Concord News Group have said that the Yaounde government is using back channels and diplomatic means to call for negotiations that will not be humiliating to the country’s president.

“As you know, it was the country’s president who declared this war and other declarations by President Paul Biya have only made the war to escalate. In Yaounde, the appetite for peace and negotiations is high, but those close to the president want to save his reputation and image in any negotiations,” a source told the Cameroon Concord News Group’s North American correspondent.

“That was a huge blunder. As a statesman you must watch your words. Our president jumped the gun and this is hurting the country. Declaring that the form of the state was non-negotiable is one blunder that has come to bite Mr. Biya and his collaborators. They are ashamed of themselves. Nothing in this life is cast in stone. Cameroon will change and those of us within government circles know that many government officials are already talking about a 10-state federation, but will the separatists accept that offer? That is one thing that the meeting in Toronto has to deal with. Both parties involved in this conflict must learn how to yield some ground. They must meet each other halfway if peace must return,” the source said.

The Toronto meeting holds out a lot of hope for many Southern Cameroonians. Though it will not put an end to the conflict, it will indeed  lay the groundwork for further peace talks.

With the government pushing for peace talks behind the scenes, many hold that there is some light at the end of the tunnel though many observers warn that separatists must be very careful, adding that the Yaounde government cannot be trusted because it has the nasty habit of speaking from both sides of its mouth.

The world is watching and the general expectation is that an agreement should be reached in Toronto, Canada, so that more talks can take place.