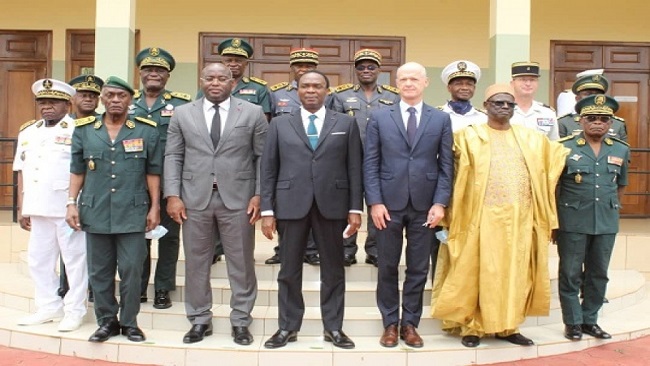 The Biya Francophone regime and the French decided to strengthen their military cooperation on September 23, 2021 in Yaoundé. The two sides were represented by Minister of Defense, Joseph Beti Assomo and the French Ambassador to Cameroon, Christophe Guilhou.

The first agreement concerns the operation of the International War College (ESIG) in Yaoundé. The 17th class of this military establishment has recently started, with 61 officers from 20 countries, including one French citizen.

French ambassador Guilhou was quoted by Cameroon Tribune as saying “it is a question of making soldiers acquire a method of joint planning of operational level and give them keys to understanding the political and security environment in the region.”

The second agreement is to support Cameroon naval officers at sea. In this regard, “a French naval officer will be deployed to the Cameroon Navy, with the objective of supporting the design of legislative and regulatory frameworks for action at sea. He will also support training and education, through the development of a body of documentation and capacity building of training centers and training of the Navy” signaling a complete takeover of the Cameroon naval force by the French.

Joseph Beti Assomo revealed that the two conventions signed on September 23, 2021 replace the two previous ones, which have expired.