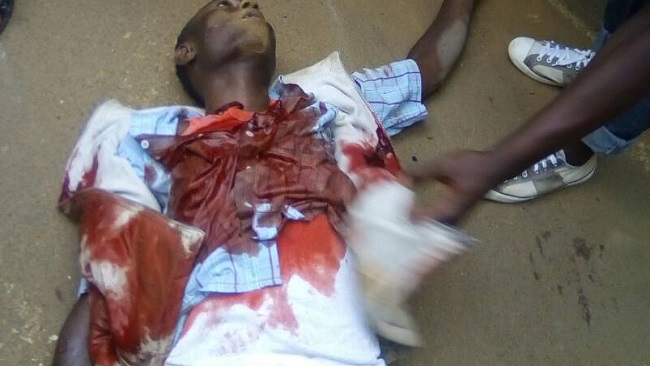 The Southern Cameroons crisis that started in late 2016 has put Cameroon in the spotlight for all the wrong reasons, especially regarding human rights abuses. Over the last fifteen months, the country’s English-speaking regions have witnessed huge human rights abuses that have caught the attention of human rights groups and the United Nations.

Besides physical abuse, others human rights have been abused by the government and its forces which have been using legal and illegal means to suppress the people living in the two restive English-speaking regions of the  country.

In 2016 when the conflict was still in its infancy, instead of seeking peaceful ways to address the demands of the protesting English-speaking minority, the Yaounde government instead opted for an iron-fist approach which has caused a protest that started as a socio-professional issue to metamorphose into a full blown civil war wherein hundreds of lives – military and civilian – have been lost.

In 2016, striking lawyers were beaten and tortured by police officers in public, while Buea University students who were simply calling for a peaceful discussion with university authorities over fees increases were made to drink raw sewage. Even those who escaped to their hostels were pursued by the police. Many girls were raped and many young men and women were taken  to the police station and ever since, nothing has been heard about them. The government is yet to account for all the students who had been arrested during the student strike and the vice chancellor who was responsible for the strike, Professor NalovaLyonga Pauline Egbe, has been rewarded with a ministerial position.

But the abuses reached their zenith in January 2017 when Barrister Felix Nkongho Agbor-Balla and Dr. Fontem Neba were arrested as negotiations between the government and Anglophone leaders stalled. This resulted in the disconnection of the Internet across the English-speaking region and the deployment of troops and special forces in the two regions. The abuses and the government’s use of military violence to check the demonstrations caused things to spiral out of control.

Schools and courts were closed, and ghost town operations were organized by angry English-speaking Cameroonians with the objective of bringing the government to the negotiating table for the form of the state to be discussed. But the government refusal to discuss the form of the state has caused the conflict to drag on and this has resulted in moderate English-speaking Cameroonians to move from federalism to secession. And this is causing the conflict to take a turn for the worse.

Today, the extrajudicial killings are a daily affair and ordinary citizens are also killing and maiming soldiers in retaliation for the killing of many civilians. The arrest of secessionists leaders in Nigeria on January 5, 2018, and their illegal extradition to Yaounde in late January have not helped matters. These leaders have been held incommunicado for almost two months and this is a concern to rights groups which hold that they deserve a fair trial and access to lawyers.

The abuses are ongoing and getting serious by the day. The international community is concerned about the Cameroon government’s refusal to call for genuine and inclusive dialogue. And its approach to the resolution of this conflict has been criticized by the International Crisis Group. In its report that was released after the English-speaking regions declared their independence last October, the rights group decried government action.

“On 1 October, tens of thousands of people began a peaceful march (holding a plant symbolising peace and chanting “no violence”) to proclaim the independence of Ambazonia (the name given by secessionists to their hypothetical state). In Bamenda, Buea and across dozens of towns and communities, people marched and hoisted Ambazonian flags at intersections and atop the residences of traditional chiefs as well as onto a police station and a gendarmerie post. Independence was symbolically proclaimed in chiefs’ compounds,” the report said.

It added that “Defence and security forces responded with disproportionate force, leading to at least 40 deaths and over 100 injured protesters between 28 September and 2 October. This death toll is the result of live ammunition and excessive use of tear gas, including in homes and against the faithful as they left church. Defence and security forces arrested hundreds of people without warrant, including in their homes. They made use of torture and inhuman and degrading treatment. Sexual abuse, destruction of property and looting of homes by soldiers and police, as well as shooting from helicopters at protesters in Kumba, Bamenda and near Buea were reported by a dozen residents, local politicians, senior officials, the press, human rights organisations and the Catholic bishops of the two regions.”

It pointed out that “The villages of secessionist leaders such as Ewele, Akwaya, Eyumodjock and Ekona were targeted by the defence and security forces, forcing thousands of young men to flee to the bush for fear of being killed or arrested and tortured. According to the witness statements of locals, a policeman and a soldier deployed in the zone, “soldiers are murdering some people in their homes and shooting at the feet of others”. On his Facebook page, the former Supreme Court judge, Ayah Paul Abine, claims to have escaped assassination at his home in Akwaya, which was also reportedly looted by soldiers. Violence, arrests and looting by military and police continued throughout the following week, notably in the department of Manyu. Suspected of secessionism, Deputy Mayor of Ndu was reportedly killed at home by the military on 2 October.”

In an oral update by ZeidRa’ad Al Hussein to the 37th session of the Human Rights Council on March 7, 2018; he added that his office had yet to be granted access to monitor rights violations in the two English-speaking regions.

His address also addressed the arrest of Anglophone leaders in Nigeria and their subsequent deportation to Cameroon, where they are yet to be put before court. The U.N. has criticized the move, saying it violated international principles.

“Allegations of summary executions of civilians by members of the security forces have been reported,and are generating widespread resentment. I regret that my Office has not been given access to verify these allegations,” he said.

Since January 2018, more than 30 members of the security forces – the military, police and gendarmes – have so far been killed in guerilla style attacks, especially at checkpoints, with the latest taking place in Kumba on March 8. The separatists have also reported having kidnapped two government officials and efforts to locate the two officers have been futile.

Despite growing insecurity in the two regions, the government still maintains that there is security in the regions. It has however recently created a fifth military region in the capital of the North West region, Bamenda. The move has been seen as a means to face off with the separatists.

The separatists have since October 2017 attempted to breakaway from the Francophone region and this has resulted in bloodshed and tensions which are affected the country’s ailing economy.Despite international calls for dialogue to end the crisis which is also creating a humanitarian situation with people fleeing into Nigeria, the government has relentlessly been pursuing its policy of repression and attrition which is not producing any meaningful results.

Mr. ZeidRa’ad Al Hussein has expressed concerns about the deteriorating situation in Cameroon, regretting that the Yaounde government has not given its office access to the region in order to investigate the numerous abuses that have been brought to its attention.

“In Cameroon, what appears to be long-standing structural discrimination in the Anglophone region of the country has led to continuing clashes between security forces and separatist groups,” he said, adding that “The arrest, in Nigeria, of 47 Anglophone community leaders, and their extradition to Cameroon has reportedly led to renewed violence in the south-west and north-west regions of the country.”

“Allegations of summary executions of civilians by members of the security forces have been reported, and are generating widespread resentment. I regret that my Office has not been given access to verify these allegations,” he pointed out, stressing that “Acknowledging the complex challenges facing the authorities – including renewed displacement from the Central African Republic and the increase in Boko Haram attacks in the north – I urge the Government to make every effort to de-escalate the conflict in the Anglophone regions, and to allow unimpeded access to human rights monitors so that accurate information on the situation can inform constructive engagement on the way forward.”

The curfew in Cameroon’s North West region has been extended by another week by the governor. A March 4, 2018, press release said the extension was to contain growing threats from secessionist activities.The governor “has renewed the regional order restricting the movement of persons and property as from the 3rd of March 2018 from 09 PM to 05 AM within the North West Region for a period of one week renewable,” the release said.

The North Wes Governor, Adolphe LeleLafrique, also appealed to the population “to better collaborate with the law enforcement agencies to ‘put an end to the detrimental activities of secessionist activists and a few misguided individuals who are taking our peace loving and hospitable region hostage.”

Under the measure, movement of vehicles, persons and goods shall be strictly forbidden between 9 pm and 5 am. All public places like restaurants snack bars and night clubs shall remain closed.All transport terminals shall remain closed and night travel buses shall be expected to leave town before the curfew sets in. Circulation of motorbikes is completely suspended.

The adjoining South West region also imposed a month-long curfew over similar security concerns. The two regions are at the heart of the Anglophone crisis, where separatists are seeking to breakaway from French-majority Cameroon.

The tensions and abuse tolerated by the government have made many soldiers to be trigger-happy. On Thursday, a motor-cyclists was killed in Kumba, southwest region, just because he did not stop when the country’s flag was being brought down.

In Ndian Division in the southwest region, army soldiers are on a rampage and they have burned down many homes, leaving many residents homeless. This has been the government strategy ever since it deployed troops in the two English-speaking regions. Villages such as Kwakwa and Kembong have seen more than half of their homes burnt to the ground as a reprisal for any uniformed officers killed in the towns. The government that is supposed to protect civilians has finally turned against its own people and this has resulted in gross violation of human rights.

From the look of things, this conflict still has many more scenes. If the international community does not step in, Cameroon, a country once touted as an island of peace in a desert of chaos, will surely go the way of its fragile neighborS.

By Pelagie Ebot in Kumba