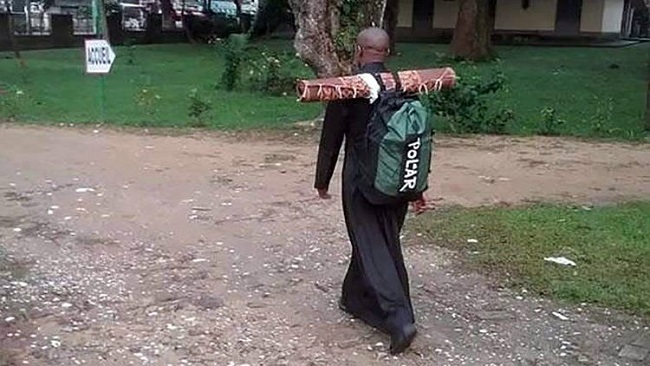 Carrying only a rucksack, sleeping mat, dressed in black Cassock with his head shaved, Fr. Lado embarked Monday on a 250 km pilgrimage that should take him from Douala to Yaoundé. He wants to draw attention to the suffering brought about by the war in Cameroon, now in its fourth year.

Fr. Lado told Fidespost that his walk was a pilgrimage to pray for dialogue, justice, peace and reconciliation in the Northwest and Southwest Regions of Cameroon.

“To pray, on the one hand, for dialogue, justice, peace and reconciliation in the Northwest and Southwest Regions of Cameroon and, on the other hand, to do penance for the reparation of crimes against human dignity committed in these regions. I draw on these Christian values, which are simply human. These are: Fraternity, dialogue, justice, reconciliation and peace,” wrote Fr. Lado recently in an open letter.

On Tuesday, Fr. Lado’s journey was abruptly interrupted when police detained him in Edéa, a city located along the Sanaga River in the Littoral Region. He was later released and is continuing with his walk. After his release, Fr. Lado said he was in good spirits. “I explained to them (police) that I was on a pilgrimage which has a long religious tradition … but they violated my civil rights,” he said.

Support for the education of children of IDPs

Fr. Lado has placed his pilgrimage under the theme, “Where is your brother?” (Gen 4: 9).

“If the Church, the (Cameroonian) authorities and the Ambazonians do not sit around the table to find a solution to this crisis, I will do my part,” said Fr. Lado when he first announced his decision to walk.

Fr. Lado also says he wants to do penance for the reparation of the crimes against human dignity that have been committed during the conflict. “This march,” adds Fr. Lado, “is a call for solidarity to support the education of children of Internally Displaced Persons or refugees, who are living precarious lives.”

Why else I am walking?

“I am walking so that human blood stops flowing in our country. I walk so that the constitutional right to demonstrate peacefully in Cameroon is respected. I walk in solidarity with internally displaced people and refugees from the Anglophone crisis. I walk to exorcise in me and in us the demon of indifference. Walking is not just a human right, but a divine right. I walk to make it work,” explained Fr. Lado.

Fr. Lado said his march is also in solidarity with hundreds detained, in Cameroon, on 22 September, after demonstrations called by the opposition party, the Movement for the Renaissance of Cameroon (MRC). The demonstrators want national dialogue, electoral reforms and the return of peace to the Anglophone regions of the country. The Cameroonian government deems demonstrations in some regions as illegal.

The government has been accused of using excessive force and deploying heavily armed security forces to prevent peaceful demonstrations. UN human rights experts, this week, demanded that authorities release the prominent opposition leader and others arrested during the country-wide peaceful protests. They urge the government to stop intimidating political activists.

The experts further want an impartial investigation into all human rights violations, including allegations of enforced disappearances, arbitrary detentions and ill-treatment of protesters, and that perpetrators be brought to justice.

“We are extremely worried about mass arrests of peaceful protesters and political activists who express dissent,” the experts said. More than 500 people were reportedly arrested after opposition-led protests on 22 September. About 200 of these are still being held in detention. They could face terrorism or national security charges and a trial in a military court simply for exercising their fundamental freedoms, said the UN rights experts.

A four-year war that no one is winning

The four-year separatist conflict has created widespread displacement of half a million people. More than 3 000 persons have been killed. Children in the conflict zones have not been able to attend school for close to four years. Earlier this month, some parents and teachers in the conflict zones braved threats from armed groups and reopened some schools.

At the heart of the crisis, in 2016, was a strike by teachers and lawyers, in the English-speaking regions of Cameroon. The professionals, supported by citizens of their areas, protested the unfair use of the French language and unjustified appointments of French speakers in their territories. Cameroon is a bilingual country. By 2017, the situation had spiralled out of control and developed into a fully-fledged separatist war. Both government forces and separatists are now bogged down in a conflict, that observers say, can only be resolved through dialogue.

The outspoken and controversial Fr. Lado is not a stranger to the Cameroonian government. He has been raising his voice from about the year 2007 when he was the vice-dean of the Faculty of Social Sciences and Management at the Catholic University of Central Africa, in Yaoundé. He has also been a critic of Paul Biya who has been President of Cameroon for 38 years.

Fr. Lado holds a doctorate in social and cultural anthropology from the University of Oxford. He has written and spoken on issues of Anthropology, Catholic Pentecostalism, trends in African Catholicism, and on social change in sub-Saharan Africa.