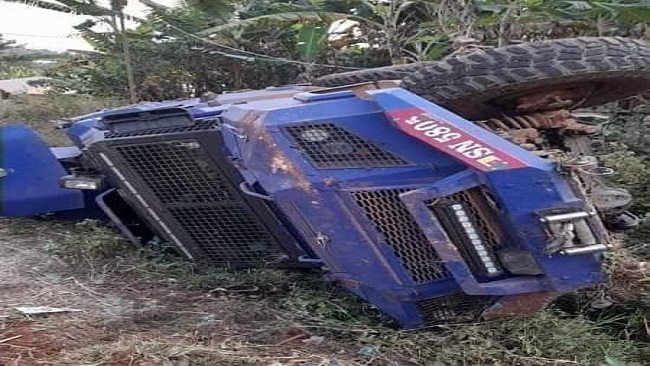 Ambazonia Restoration Forces destroyed a police vehicle that was heading to the Upper Banyang Sub Division on Sunday as it pressed on with an offensive against Cameroon government troops deployed to Manyu.

A Manyu Ghost Warriors statement said four police officers were killed during the attack in the Tinto 1 forest but our reporter in Mamfe is yet to confirm the correctness of this developing story.

There has been no comment from the Francophone civil administrator, who alongside the out gone mayor of Mamfe, John Ayuk Takunchong occasionally puts out statements and videos celebrating the genocide in Manyu Division.

Manyu has remained a hotspot since the fighting started 4 years ago, especially as the Southern Cameroonian President, Julius Ayuk Tabe, hails from this natural resources-rich Division.

The natives of this Division are not going to throw one of theirs under the boss anytime soon and the Amba fighters who have been keeping law and order in the Division have vowed that they will not be downing their tools until Mr. Julius Ayuk Tabe gets released from the East Cameroons dungeons where he has been locked up for more than 2 years.

By Asu Vera Eyere with files