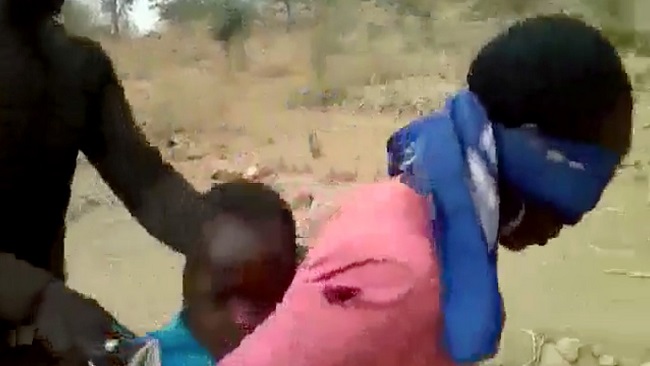 Ever since the Southern Cameroons crisis started, the government has been using violence and intimidation to silence the English-speaking minority that is determined to split from a union that has brought it more pain than gain.

The crisis that started as demonstrations by teachers and lawyers, quickly spread like wildfire to other professional sectors, with the molestation of lawyers by the country’s police serving as the fuel that was poured into a burning house.

This was made all the more worse by the brutality meted to Buea University students in 2016 just because the students wanted to peacefully discuss fee hikes with university authorities.

The University was headed at the time by Prof. Nalova Lyonga who is today the country’s minister of basic education; a position many observers say is a reward for her implementation of the government’s brutality on innocent students, a tactic the government has always used to silence opposition.

Some 2,000 innocent civilians have so far been killed in the two English-speaking regions of the country and more than 100 villages have been wiped off the country’s map by the national army and the militia formed by the government to intimidate and implement its policy of ferocious brutality.

The government of Cameroon is used to burning its own villages and killing civilians as a move to intimidate anybody who might want to challenge its authority in the future, but its fight with Southern Cameroonians might turn out to be its Waterloo, as Southern Cameroonians are using social media to expose its atrocities and the region’s Diaspora is hell-bent on giving the government a run for its money.

The Yaounde government has used this violence-based tactic in Northern Cameroon on many occasions and the last video wherein children and women were being shot point blank caused a storm of indignation across the world.

However, the videos have kept on coming out. It appears the floodgates have been opened. On Monday, another video emerged with Cameroon soldiers killing more than 20 young unarmed male adults in the country’s northern regions.

The young male were rounded up and soldiers could be seen shooting and laughing as the young men take their last breath. Many homes were torched as the soldiers advanced into the village.

The Cameroon army soldiers in the video could be heard celebrating their inhuman violence by making a mockery of those killed. They could also be heard boasting about their heinous crime.

If the world thinks the government of Cameroon will ever respect human rights then it is mistaken. Many Cameroonians have been sent to an early grave by their own government for just raising a hand against abuses by their government.

The world has to hold the Biya regime responsible for the deaths of more than five thousand Cameroonians killed in the north, southwest and northwest regions over the last two years.

Mr. Paul Biya, the country’s 86-year-old president, and his cohort of embezzlers, are prepared to kill anybody who seeks to expose their abuse. Many journalists are today at risk, as they seek to report the human catastrophe that is playing out in the north, southwest and northwest regions.

In a press release signed on August 1, 2018, by Samuel Mvondo Ayolo, a senior civil servant at the presidency, the government urged the ministry of communication to participate in the working session to be held with the Facebook delegation that will be in Cameroon from August 6-15, 2018.

The press release also urges government news agencies such as the CRTV, SOPECAM and CNC to participate in the working session. No private news organ has been invited to attend the event.

The release also stresses that the objective is to focus on fake news that will be published on the country on Facebook during the upcoming presidential election. But analysts across the globe are of the opinion that there is more than meets the eye in the new relationship between Facebook and Cameroon.

The numerous videos that have hurt the country’s reputation abroad and given some of the country’s allies reasons to reflect on their alliance with a country that is wont to killing its own citizens, is causing the government to lose lots of money.

For more than six months, the Yaounde government has been faced with tough financial challenges and this has caused some important projects to be put on hold. The construction of stadiums for the 2019 Africa Cup of Nations has run into some huge speed bumps.

Money is the issue and the country’s economy has taken so many punches thrown by Southern Cameroonian fighters who have now engaged in a war of economic sabotage. This has significantly reduced the government’s ability to operate at full capacity.

The Southern Cameroons crisis has hit the Yaounde government like a ton of bricks. The country’s economy is suffering. Its Automatic Teller Machines (ATM) in the English-speaking regions seem to be out of service. State corporations located in Southern Cameroons are already feeling the heat.

Pamol, a palm oil production corporation located in Lobe, a small town in Ndian Division, has finally shut its doors as the fighting between Southern Cameroonian fighters and army soldiers takes a turn for the worse. This revenue stream has stopped flowing and Yaounde is really ill-at-ease.

Pamol’s closure is bad news for the government. More than three thousand Pamol workers are today unemployed and living in permanent fear, as the fighting between the warring factions rages on.

Schools and courts in the region have been closed for almost two years and it is increasingly obvious that the Yaoundé government has lost control of certain parts of the two English-speaking regions. But it is not only Pamol’s closure that is causing the government nightmares. The Cameroon Development Corporation (CDC), one of the country’s major employers, is also going through a rough patch.

Some of its factories have closed shop, while the fighters have deliberately set some of its infrastructure ablaze as part of their economic sabotage campaign. Malende, a small town located some 6 km from Muyuka, has witnessed huge unemployment rates. The corporation’s rubber factory was set ablaze sometime last month by some unidentified men and this has hit CDC like a ton of bricks.

In other plantations, many workers have simply deserted. The fighting is disrupting economic activities in those plantations and many workers hold that it is better to quit than be caught up between the devil and the deep blue sea.

The fighting, coupled with the derisory salaries the corporation pays to its workers, has made CDC unattractive and this is gradually eroding the government’s tax base.

Similarly, government revenue has taken a nosedive, as the national oil refinery located in the Southwest region is also facing some major challenges. While falling global oil prices are spreading pain and suffering among oil exporters, the declining oil output and constant attempts by Southern Cameroonian fighters to bring down the country’s lone oil refinery are leaving the government in a huge messy economic quandary.

The crisis is a true nightmare to this once-upon-a-time oasis of peace. It is, indeed, a millstone around the government’s neck. Things might soon spiral out of control as the fighters threaten to attack SONARA at the slightest opportunity. They argue that they have never gained from the oil and that it will be better for everybody to suffer the consequences of the government’s recklessness.

These planned acts of sabotage do not augur well for a government that is already on its knees. It is already having a tough time paying civil servants and this is causing fear among the civil servants, especially the military, many of whom want to desert and seek a better life for their families abroad.

The Yaounde government has, over the last months, been left with a bloodshot eye. The humiliating videos are costing the country huge amounts of money. The government needs money, but its allies are not very happy with its human rights record. It is currently under enormous pressure from its allies who question the rationale behind the war it declared in Southern Cameroons and the inhuman killings unfolding in the northern part of the country.

To reduce the exposure of its atrocities, it is now seeking an alliance with Facebook and this might cause Facebook huge reputational damage. The California-based giant will surely not yield to pressure from the Yaounde government which is wont to human rights abuses.

However, regardless of what relationship the Yaounde government establishes with Facebook, Cameroonians are determined to expose its abuses. There are many social media platforms and Facebook is just one of them. The era of citizen journalism is here to stay. Rather than seek to hide its atrocities, the government of Cameroon will be a respected government if it seeks to address the issues instead of thinking that it can deceive everybody all the time.