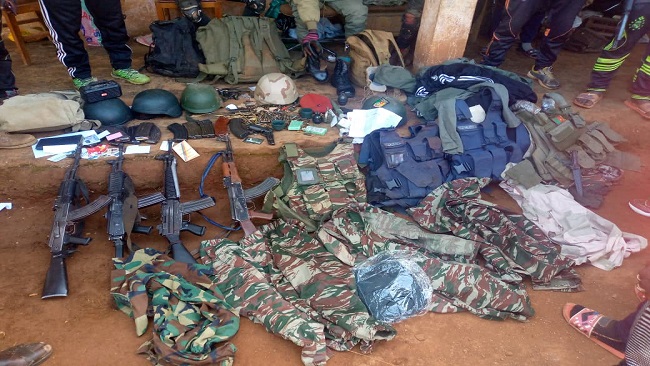 Governor Adolphe Lele L’Afrique of the North West region has confirmed the combat casualties recorded by Cameroon government security agents in Lassin in Bui Division on Monday May 24.

In a statement read on state radio and television, the Francophone governor stated that

“At about 2:00 am (local time), one of the leaders of the armed separatist groups, General No Pity attacked the gendarmerie brigade at Lassin in Bui, North-West region, killing four gendarmes and taking away weapons.”

This new attack adds to the list of dead soldiers in Southern Cameroons in 2021.

In January, three gendarmes, one policeman and two civilians were killed in an attack on a checkpoint in Matazem, a small town in the Western region, located some few miles from Bamenda the chief city in the North West region.

In March, five members of the security forces and four civilians were killed in the locality of Galim.

The War in Ambazonia has already claimed at least 40 000 lives, almost all of them civilian children, men and women, murdered by Cameroun troops in a series of targeted killings, organized massacres, and killings by fire in over 400 villages burnt down to ashes across Ambazonia. Over half a million people have been forcibly displaced as refugees living in various countries and especially in refugee camps in Nigeria.Over another half a million people have become IDPs hiding in forests, caves and hills due to forced displacement. Additionally, over 1.5 million people are facing a humanitarian disaster.

Republique du Cameroun uses not only arson and the destruction of food, livestock, and crops in the fields as weapons of war. It also uses rape. Rape of Ambazonian women and girls by Cameroun troops is systematic and widespread. This agonizing situation is compounded by the fact that a high percentage of Cameroun troops are HIV positive and also has other STDs. When they rape they infect the women and girls. This appears to be part of the genocide agenda of Cameroun. Reports are now emerging of scores of school girls raped, impregnated and infected by Republique du Cameroun’s troops. This poses a nightmare not only of the HIV and STD infections but also of rampant teenage pregnancies. Cameroun troops have burnt down health facilities and killed health workers in rural and semi-urban areas. Accessing health facilities or health practitioners is a huge challenge for rural and semi-urban folks.