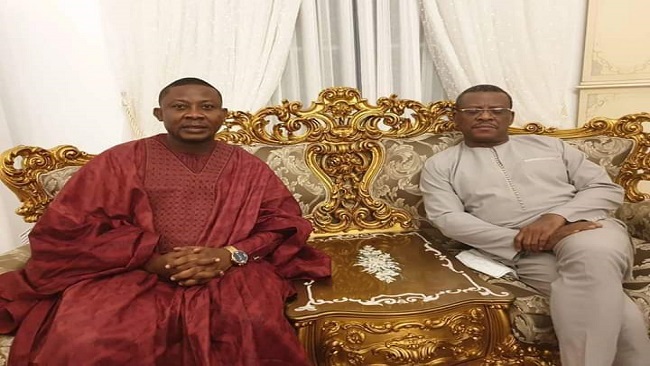 Cameroon’s Prime Minister, Dion Ngute, and staunch member of the ruling CPDM also known as the crime syndicate, has met with the fake pastor and conman, Nkongho Success, who might have tried hard to reinvent himself, but has failed woefully as he has never really played any major role in the crisis that is tearing the country apart.

Mr. Nkongho, who burnt his Cameroon passport on camera in Nigeria, has now become a pro-government agent who is betraying many Southern Cameroonians.

The conman, who escaped to Nigeria even before the crisis began because he deceived many people that he would grant them visas to the United States, has used the Southern Cameroons situation  to get his way back home.

He is now lodged in Yaoundé and he is being used by the country’s territorial Administration minister, Atanga Nji, himself a conman and an ex-convict, to do the government’s dirty work.

Mr. Success Nkongho, who can no longer go to his native Mamfe, is constantly being sent by the cash-strapped and barefaced government to go and negotiate the return of more Cameroonians living abroad, many of whom are not even refugees.

The doctor of fraud, also known as Failure Nkongho, had his entire family moved to Yaoundé before he landed there with a bunch of wanderers who had nothing to do with the crisis that has resulted in the killing of some 5,000 Southern Cameroonians and the displacement of one million people.

Since returning to Cameroon, conman Nkongho Success has been struggling to convince the fearless Field Marshall of the Red Dragons of Lebialem to drop down his weapons and bring his fighters to Yaoundé.

While his attempts to rope in Field Marshal into the mess he has created for himself has not been fruitful, the government is now using deputy minister of the economy, Paul Tasong, to reach out to the fighter who has remained a nightmare to the government.

Mr. Paul Tasong has promised that six council seats would be filled by Field Marshal’s protégés if he put paid to the fighting, at least during the election period.

Paul Tasong is still facing huge bumps in his way as Field Marshal is not taking the bait, including promises of money.

Paul Tasong wants Member of Parliament Forji, a CPDM stalwart, to win the upcoming parliamentary election and if the fighting continues, his wish will never come true.

The Yaoundé government is used to dealing with conmen, which makes many Cameroonians to hold that the ruling party, from where many ministers are appointed, is a crime syndicate made out of the same mold as the Sicilian Mafia.

Many analysts and observers of the Cameroon political scene hold that it won’t be long for Mr. Success Nkongho, who has been singing like a magpie, to be killed and disposed of like used tissue by the same government that is pretending to protect him after his return to Yaoundé.

Mr. Nkongho has no real value when it comes to the crisis and he will soon be discovered by a government that is desperate and in a haste to put an end to a crisis that has left it with a bloodshot eye.

By Joan Atemkeng in Yaounde