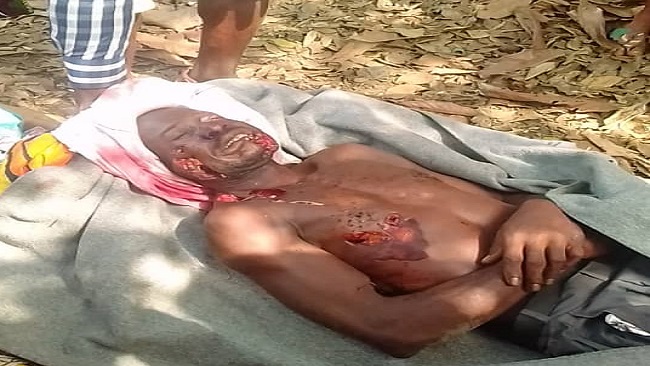 Southern Cameroons Crisis: The military is carrying out summary executions 0

As the world is currently more focused on the mess the Trump Administration has left behind in Washington D.C., many dictators across the world now think they have a free hand to wreak havoc in their own countries and that is the game that is playing out in Southern Cameroons where a four-year insurgency has given the Yaounde government the carte blanche to transform the country’s two English-speaking regions into an open killing field.

While the scale might not be as large as what happened in Ngarbuh, Kumba and Mautu, the killings are still gruesome and targeted which clearly explains that the Yaounde government does not believe in the rule of law.

This slaughtering has been going on for four years and it is now becoming more spectacular and anybody suspected by the country’s military is good enough to die.

Sometimes, the soldiers take it upon themselves to eliminate young men who have beautiful girlfriends just because they desire those girls.

The country’s government has simply shredded the rules book and its soldiers are on the prowl, targeting young men or any new faces visiting the region.

On Saturday, January 29, the military arrested a 46-year-old man known as Agbor Issac Assek in Ossing and promptly gunned him down without interrogating him or without following known legal procedures to determine or establish the reason for his arrest.

Cameroon Concord News Group sources in Ossing hold that the victim had been in the military’s cross hairs for some time, but the need to arrest him became urgent when the principal of Government High School Ossing was killed in broad day light by Southern Cameroonian insurgents who have been fighting for the total liberation of the former British colony.

Our source said that “Even before the principal’s death, the military has been looking for him on the grounds that he was a friend to General Macopolo, an Amba General who has been operating around the Ossing-Kembong axis.”

But human rights activists and lawyers are questioning the government’s actions in this case and many others as they argue that such summary executions will only result in an escalation of violence in the region.

According to a human rights activist in Mamfe, a town some 6 kilometers from Ossing, by undertaking such an action, the Yaounde government has clearly demonstrated that it does not believe in the rule of law.

“One would think that with the passage of time, the military and the government would learn the lessons of the past. The killing of Mr. Agbor Isaac does not address any issues. It will only call for violence and the circle of violence will only continue,” he said.

“Mr. Agbor had already been arrested and the military was supposed to have followed due process. Gunning him down is a clear demonstration that the government and the military do not believe in human rights and the rule of law,” the activist, who elected anonymity, said.

“We are really disappointed with the way the government has conducted its military operation. Just killing young men will not cause the issues to disappear. The government needs to come down its high horse to discuss with all the factions involved in this conflict that has torn the country apart,” he said.

“With such an approach, it is hard for a peaceful solution to emerge. There are many Anglophone Cameroonians who want to come home from abroad, but they cannot because of the government’s indiscriminate killing of young people,” he stressed.

“If members of the region’s Diaspora come home, jealousy could cause the military to arrest these people and arbitrary arrests discourage our brothers who really want to return to their land from investing here and this is creating unemployment and other serious economic issues,” he regretted.

“The government should be leading by examples and it is totally wrong for soldiers to be gunning down young men. This country must be guided by the rule of law and due process should be followed, especially when the suspects have been arrested. We cannot continue to conduct ourselves as if we are wild animals,” our source said.

“The Southwest and Northwest regions are not safe, though ministers like Paul Atanga Nji are misleading the world that peace has returned to the two English-speaking regions. Nobody is safe. The military has the carte blanche to kill whoever it wants. This is not how a country should be operated. It is indeed disheartening,” our source concluded.

Meanwhile, due to increasing insecurity in the two English-speaking regions of the country, the government has opted to conduct recruitment into the elite military corp known as the BIR for the Northwest and Southwest regions in Bafoussam and Douala respectively.

Many critics have already indicated that if the government is scared of carrying out recruitment in Bamenda and Buea, why would ordinary citizens believe that things have returned to normal?

The government, most critics assert, is not willing to address the issues that triggered the conflict. They argue that there are more French-speaking Cameroonian officials in the two English-speaking regions today than they were before the commencement of the conflict.

They argue that the government is clearly provoking the English-speaking minority, adding that with such an attitude, the conflict will never be over.

It is obvious that even the country’s president, Paul Biya, no longer cares about things in the country and has given his corrupt officials a free hand to handle the insurgency however they  want.

The activist stressd that if the government had to change its mind regarding the crisis that has created hundreds of thousands of refugees and internally displaced persons, then the international community  must hold its feet to the fire.

While the killing continues, there is however a feeling that   there is hope on the horizon. The Southern Cameroons Diaspora in the United States has already briefed the Biden Administration on the situation in the two English-speaking regions of the country and the nominee for the post of Secretary of State has already indicated that the new Biden Administration will be laser focused on Cameroon due to the gross human rights abuses.

Similarly, the arrival of a senior Vatican official in the country last week might help change government decisions on how it operates in the two English-speaking regions.

The Vatican senior official who has met with Cameroon government officials has called on the government to make peace with its English-speaking minority in order to end the killings and restore peace in the region.

The world is waiting for the government of Cameroon to realize that violence only begets violence and that there will never be any military victory in this conflict as both parties are determined to win the war.