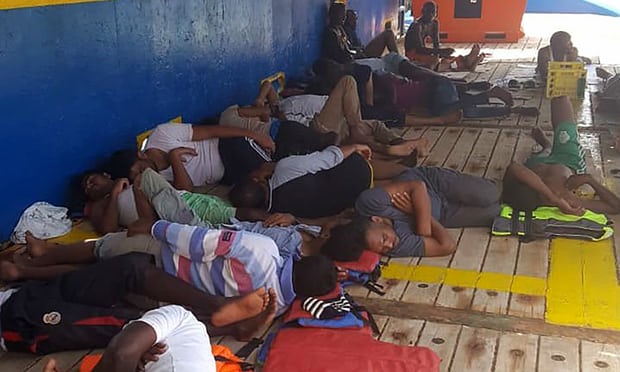 Two pregnant women are among a group of migrants left stranded at sea for almost a fortnight after Tunisia became the latest of four countries to refuse their ship entry.

The migrants, recovered by a Tunisian supply vessel after they were found adrift in a small wooden boat reportedly within Malta’s search and rescue zone, are anchored a dozen miles offshore as they enter the 13th day of their ordeal with supplies of food and medicine dwindling.

It is understood the 40-strong group initially set sail from Libya, on a route frequently used by those seeking to reach Europe.

Refused entry by Malta, France, Italy and now Tunisia, the passengers and crew of the ship, the Sarost 5, have become pawns in a much wider political game, as Europe seeks to increase pressure on north Africa to do more to control migrant routes that pass through its waters.

Conditions aboard the ship, which is ill-equipped for such unexpected circumstances, are understood to be deteriorating.

“The situation on the ship is very bad,” said Mongi Slim of the Tunisian Red Crescent, based in the coastal commune of Zarzis, on Tuesday. “It’s hot and [on Monday] we had high winds. The captain said that he was no longer allowing medical supplies or food on board, to put more pressure on the Tunisian government. However, we think he has changed his mind, meaning we can get doctors, gynaecologists and nurses to the ship either this afternoon or tomorrow.”

Contacted by one of the migrants through social media, the website InfoMigrants reported one as saying: “We are left to fend for ourselves. We hardly eat, because there is no food left.

“We eat a piece of bread and one egg a day. We sleep on the floor, we do not have soap or toothbrushes. The crew members do everything to help us but they are also exhausted.”

Nine of the migrants are said to have travelled from Bangladesh, while others began their journey in sub-Saharan Africa. According to Slim, the two pregnant women have travelled from southern Cameroon. One is five months into her pregnancy, the other two.

All the passengers initially insisted they would only get off at a European port because they had paid so much for the journey. However, after 12 days at sea Slim thinks their attitude has changed.

“We’ve asked for emergency permission for the two women to come ashore, but we’re ready to receive all of them,” Slim said. “We have the third floor of our centre in Zarzis clear and waiting. They just need permission to land.”

Hamza Meddeb, a research fellow specialising in Tunisian affairs at the European University Institute in Florence, said there was a wider context to the migrants’ plight. “This is really about the EU trying to put pressure on north African countries, specifically Tunisia and Morocco, to play a greater role in handling the migrant crisis. However, it’s clear that Tunisia doesn’t want to open the door to that. They’re saying that this isn’t a north African problem so much as it’s a European one, which takes us to where we are now. The decision not to let them land isn’t a humanitarian decision so much as a political one.” 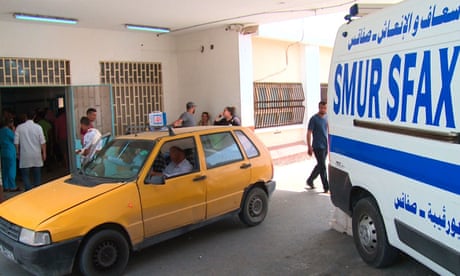 Leading civil society groups in Tunisia have called on the government to allow the Sarost 5 to dock. “It’s a very difficult situation,” said Messaoud Romdhani of the Forum Tunisien pour les Droits Economiques et Sociaux, one of the organisations urging the government to allow the migrants to land. “We can understand the Tunisian government’s situation. Europe is putting a lot of pressure on the Maghreb countries to host migrants.

“However, in Tunisia we have our own poor economic situation, and no legal framework to protect migrants and refugees. Also, the Tunisian government is very wary about being forced to act as the guardians of the Mediterranean. But we don’t want the migrants to have to return to Libya, it’s anarchy there, and we don’t want them to be forced to return to their country of origin.”

Attitudes across Europe appear to be hardening. In June, Italy closed its portsto the rescue ships that patrol the Mediterranean offering assistance to migrant boats in distress. The same month, a leaked EU report mooted the idea of establishing migrant centres in north Africa to relieve pressure on countries in western Europe, a plan emphatically rejected by Tunisia.

“The rise of the rightwing parties across Europe has hardened attitudes towards migrants,” Romdhani said. “However, we need to understand that they’re not going to stop coming. As long as there’s war, ethnic strife or their own poor economic circumstances, they’re going to keep coming. The only winners in this are the smugglers.”