Southern Cameroons War: “Enemies of Ambazonia have faced defeat in Eyumojock and Akwaya” 0

A local leader of the Southern Cameroons Restoration Forces charged with the liberation of the Manyu County has highlighted the failure of the Biya Francophone regime and its allies deep within the Buhari administration in the Federal Republic of Nigeria in their push to regain control of the strategic border town of Ekok, observing that the enemies of the Ambazonian people have faced defeat in Eyumojock and Akwaya sub constituencies.

The captain of the Manyu Odeshi Warriors made the remarks on Saturday in a statement issued on the state of the fighting raging in the hinterlands of the Manyu County particularly in the Etoko-Kendem border and in the Ekok- Otu corridor.  The Ambazonian freedom fighter also pointed out that the Southern Cameroons border with Nigeria has turned into a field of defeats for Ambazonian enemies adding, “We ask the Almighty God to take revenge on Biya and Buhari and their acolytes for their crimes and treachery against the Federal Republic of Ambazonia and its powerful Interim Government.”

Cameroon Intelligence Report understands the Biya Francophone Beti Ewondo regime and the Muhammadu Buhari Fulani crime syndicate in Abuja are two regimes that excelled each other in hypocrisy and treachery in order to prove their complaisance to the French government headed by Emmanuel Macron. 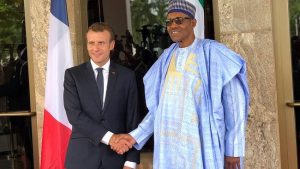 The Ambazonia Restoration Force has been defending Southern Cameroons women and children including the Ambazonian nation against a France-French Cameroun-led coalition of invaders.

The coalition, which features several soldiers from France and the Republic of Chad, began the campaign last year, killing more than two thousand Southern Cameroonians. Military planes donated by the United States government to combat the Nigerian Islamic sect, Boko Haram now provides aerial intelligence to the French Cameroun army, while helping out the invading forces.

By Rita Akana in Ekok