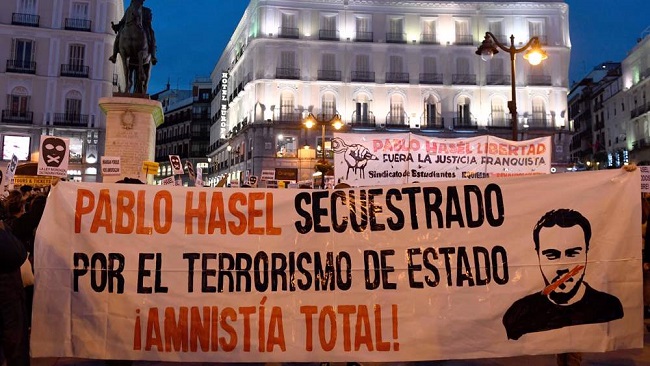 Thousands of people have taken to the streets in Spain for  a third consecutive night demanding the release of a jailed rapper.

For the third night in a row, protesters took to the streets on Thursday night demanding the rapper be released.

In Barcelona, hooded youths hurled stones and bottles at police vans, damaged some vehicles, and a barricade was erected, prompting police to fire tear gas. Small fires were lit in various places in the Catalan capital where protesters burned whatever furniture they found.

The newsroom of the newspaper El Periodico de Cataluna was attacked, while TVE television showed images of clashes in the eastern city of Valencia. Protesters also took to the streets in several cities in the Basque Country.

Since the protests started on Tuesday, police have arrested dozens of protesters in protests that intensified on Wednesday night, with police in Madrid, Barcelona and other Catalan cities firing tear gas, foam and sound bombs at the growing number of protesters who hurled projectiles and set fire to dumpsters. Fifty-five people were injured in the clashes, including 35 police officers. In total, police arrested some 80 protesters in the past days and one woman lost an eye after being hit by a projectile during clashes with Barcelona police who were shooting rubber bullets at protesters.