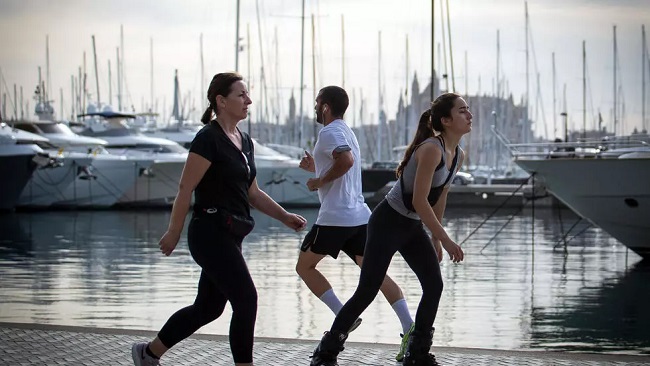 Spaniards were allowed out of their homes to exercise and walk freely after 48 days of confinement on Saturday as some European nations began cautiously easing virus lockdowns while others like Russia faced a spike in new infections.

As governments across the globe balance lifting restrictions to restart economies against the risk of new infections, US authorities brought some hope by approving an experimental drug for emergency use on coronavirus patients.

The measure was the latest step in a global push to find viable treatments and a vaccine for the coronavirus, which has left half of humanity under some form of lockdown, hammered the world economy and caused more than 3.3 million confirmed infections.

The virus has killed nearly 239,000 people since it emerged in China late last year.

With signs the pandemic in their hardest-hit nations is slowing, European countries and some parts of the US have begun to lift restrictions and to try to inject life into economies battered by weeks of closure.

In Madrid and Barcelona, Spaniards took to the streets to exercise and walk freely as the government eased seven weeks of strict lockdown in a country with one of the highest number of fatalities at nearly 25,000.

“After so many weeks in confinement, I badly wanted to go out, run, see the world,” said financial advisor Marcos Abeytua in Madrid’s Chueca district who got up a 7am to enjoy some time outside. “Yesterday, I was like a child on Christmas Eve.”

In the city’s Retiro park, many residents were out to running, sometimes in groups, as a policeman used a loudspeaker to urge them to keep out of deserted avenue and on the pavement.

Spanish Prime Minister Pedro Sanchez however said masks would be obligatory on public transport from Monday.

Spain, Germany, Austria and Scandinavian nations are all slowly easing lockdowns as the virus cases slow though they will keep in place social distancing measures, demand the use of masks or increase testing to try to track infections.

France on Saturday decided it would extend a health emergency, in place since March 24, by two months until July 24, Health Minister Olivier Veran announced after a cabinet meeting.

Italy is preparing to ease restrictions in coming days while British Prime Minister Boris Johnson, who spent time in intensive care with the virus, said Britain had past the peak of its outbreak.

Ireland extended its lockdown by two weeks to May 18, with Prime Minister Leo Varadkar saying the nation will reopen “in a slow, phased, staged way” after that.

In Russia, though, authorities reported the largest increase in coronavirus cases with the new infections rising by nearly 10,000 in a single day.

In Moscow, the epicentre of Russia’s outbreak, around 2 percent of the population is infected by COVID-19, the disease caused by coronavirus, officials said.

“The threat is apparently on the rise,” Moscow Mayor Sergei Sobyanin, said on his blog earlier Saturday.

More than 3.3 million cases of infection have been officially diagnosed in 195 countries, including 1.5 million in Europe alone. That number is likely only a fraction of true cases as testing is still limited.

US President Donald Trump on Friday announced that Remdesivir, an antiviral drug initially developed to treat Ebola, was given the green light for use after a major trial found that it boosted recovery in serious COVID-19 patients.

The drug incorporates itself into the virus’s genome, short-circuiting its replication process.

Its approval came as the US leaders struggled with growing pressure from citizens wearying of stay-at-home orders.

Trump is keen for a turnaround as the world’s largest economy reels with tens of millions left jobless.

Texas became the largest US state yet to ease curbs, while anti-lockdown demonstrations were held in several states — including California, where officials had re-closed beaches beginning Friday to avoid a repeat of last weekend when crowds flocked to the shoreline.

“Open California!” chanted protesters near the closed beaches, carrying signs that read “All jobs are essential” or “Freedom is essential”.

In Asia, India announced that the lockdown on its 1.3 billion people — the world’s biggest — would continue for two more weeks from May 4.

And in Singapore, the government said Saturday that pet food stores and hair salons will be allowed to reopen on May 12.

Most of the city-state’s infections have been detected at dormitories housing migrant workers, and their confinement was extended to June 1.

Hong Kong recorded zero confirmed case of coronavirus on Saturday, the sixth day within a week.

The city’s social distancing regulations including limits on gathering of more than four people are due to expire on May 7, but authorities have not decided whether to extend them.

The city’s chief executive has said that civil servants will return to work in the office starting from May 4.

During the long weekend with public holidays to celebrate Buddha’s birthday and Labour Day, residents flocked to country parks and the city’s outlying islands to get some fresh air.

Shops and restaurants started to resume business in normal opening hours with more consumers going out to streets and shopping malls.

The virus restrictions put a damper on May Day celebrations worldwide on Friday as many labour unions delayed their rallies and some held online events, while a determined few hit the streets in face masks.

May Day carried extra significance this year because of the staggering number of people put out of work by the pandemic, with the global economy in a tailspin and facing its worst downturn since the Great Depression.

Stock markets tumbled again on Friday after Trump’s unproven allegation that the virus may have come from a lab in Wuhan — the central Chinese city where the disease first emerged.