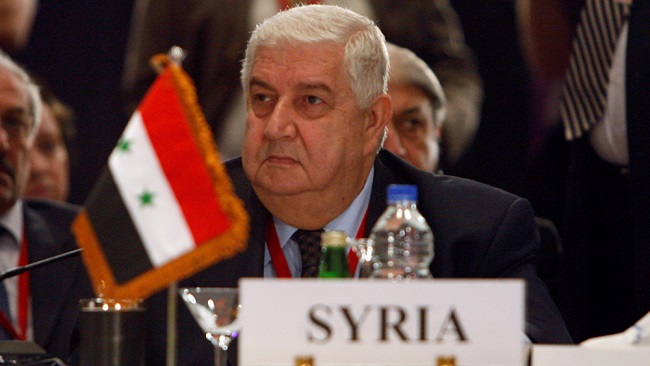 Syria’s Foreign Minister and deputy Prime Minister Walid al-Muallem has died at the age of 79.

According to the report, he would be laid to rest later on Monday in Damascus.

There were no details on the cause of his death, but Syria’s top diplomat had for years been suffering from a heart condition.

“He was known for his honorable patriotic positions,” the government said in a statement.

According to a source close to the Damascus government, it is widely expected his deputy, Faisal Mekdad, will succeed him as foreign minister.

The veteran diplomat held a succession of top diplomatic posts, including ambassador to the United States.

In his last statements, Muallem denounced the persisting and unilateral economic sanctions against the Syrian nation, saying on October 25 that the sanctions have deteriorated the economic situation, particularly with the COVID-19 pandemic raging across the globe.

He also condemned the Western role in setting conditions and fabricating flimsy pretexts to halt the return of Syrian refugees to their homeland, slamming the West for politicizing the purely humanitarian issue and its use as a card for advancing their political agendas.

Some 5.6 million Syrians have been forced to flee abroad as refugees, mostly to the neighboring countries of Turkey, Lebanon, Jordan, Egypt and Iraq.

Moreover, one million Syrian children have been born as refugees ever since the foreign-backed militancy began in their country back in March 2011.

Syria’s top diplomat repeatedly slammed the US role in the conflict that plagued his country.

In August 2012, Muallem said Washington was “the major player against Syria” in the war, noting that the US was supporting terrorism in Syria in spite of its claims to be fighting it.

He also said in his annual address to the United Nations General Assembly in 2019 that “tens of thousands of foreign terrorist fighters have been brought to Syria from more than a hundred countries, with the support and cover of States that are known to all”, in an apparent reference to the US and Turkey, who maintain an illegal military presence in northern Syria.

Muallem also warned that the Western claims of alleged use of chemical weapons by the Syrian government served as a pretext to launch a military campaign against his country.

Syria has been gripped by foreign-backed militancy since March 2011. The Syrian government says the Israeli regime and its Western and regional allies are aiding the Takfiri terrorist groups that are wreaking havoc in the country.

Government forces have already managed to undo militant gains across the country and bring back almost all of Syrian soil under control.