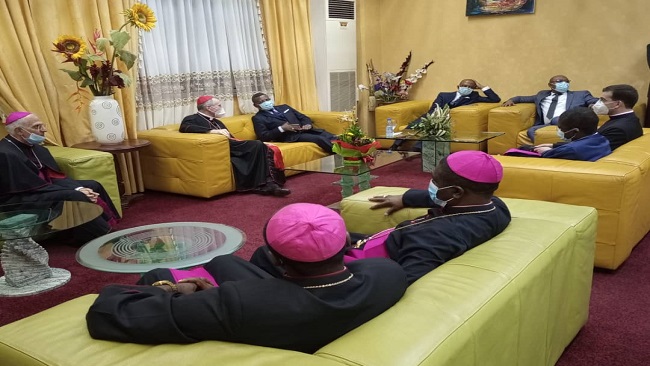 Prime Minister Dion Ngute Joseph has welcomed the Secretary of state of the Holy See, Cardinal Pietro Parolin, to Yaounde on behalf of the Head of State, President Paul Biya.

His Eminence Cardinal Pietro Parolin, the Vatican’s Secretary of State touched down at the Yaoundé Nsimalen International Airport at 5:30 pm Thursday, January 28, 2021, on his maiden working visit to Cameroon.

According to a program made public by Mgr. Jervis Kebei Kewi, General Secretary of the National Episcopal Conference of Cameroon, the Pope’s envoy is on a seven-day visit that will take him to the Archdiocese of Bamenda in the country’s restive North West Region.

On Friday, January 29, 2021, Cardinal Pietro Parolin will celebrate Mass at the Nunciature before a meeting with Bishops at 9:00 am.

Later at 1:00 pm, the prelate will meet Cameroon’s Head of State, President Paul Biya at the Unity Palace.

Cardinal Pietro Parolin is expected at Foyer de L’Esperance Yaoundé at 4:45 pm ahead of a 6 pm meeting with Joseph Dion Ngute, Prime Minister, Head of Government.

The Prime Minister will offer an official supper in the name of the Head of State at 7:00 pm.

Cardinal Pietro Parolin will travel to Bamenda by plane on Saturday afternoon after he would have celebrated Mass at the Minor Basilica Mary Queen of Apostles, with the Bishops. Upon arrival in Bamenda, the Vatican’s secretary of state will meet with the clergy of the Bamenda Episcopal Province.

During a holy mass in Bamenda on Sunday, Cardinal Pietro Parolin will impose the Pallium on Mgr. Andrew Fuanya Nkea, Archbishop of Bamenda.

The august guest will fly back to Yaoundé on Sunday afternoon to be treated to supper at the residence of Mgr. Jean Mbarga, Archbishop of Yaoundé.

On Monday, February 1, 2021, Cardinal Pietro Parolin will celebrate Mass in the Carmelite Monastery in Etoudi at 7:30 am. It will be followed by a Lectio Magistralis at the Catholic University of Central Africa, on the Diplomacy of the Holy See.

A Mass with the Religious at the Yaoundé Cathedral on Tuesday morning will pave the way for Cardinal Pietro Parolin’s departure for Rome early Wednesday morning.