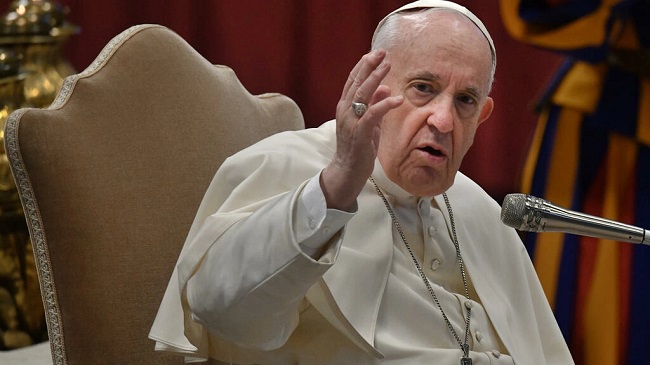 The Holy Father arrives in Malta 0

Pope Francis began his first trip to Malta Saturday, where he is expected to ask the heavily Catholic country to do more to help migrants who have risked their lives trying to cross the Mediterranean to reach Europe.

The pontiff’s plane touched down around 9:50 local time (0750 GMT) at Malta’s airport south of the capital, ahead of a welcome ceremony with Prime Minister Robert Abela and dignitaries at the Grandmaster’s Palace, the former seat of the Knights Hospitaller who ruled for centuries over the Mediterranean archipelago.

Aboard the papal plane, Francis — who had boarded using a lift for reduced mobility passengers instead of stairs — told journalists accompanying him the visit to the tiny island nation would be “quick, but will be beautiful”.

The visit to Malta was scheduled two years ago but was delayed by the coronavirus pandemic, and now comes as war in Ukraine has unleashed Europe’s worst refugee crisis since World War II, with more than four million fleeing the country.

Francis said on Twitter Friday that his “journey in the footsteps of the Apostle Paul” would be an “opportunity to know at first hand a Christian community with a millennia-old history”.

Francis, who will visit a migrant centre during his two-day trip, is likely to renew calls for an end to the war while reminding the world not to overlook those who continue to risk their lives at sea trying to reach Europe from North Africa.

“The pope comes to our island as a herald and messenger of reconciliation and mercy not only in the Mediterranean basin, but throughout the world,” the Archbishop of Malta Charles Scicluna said in Italy’s Christian Family magazine published Friday.

Francis’s visit to Malta follows those of his predecessors Benedict XVI in 2010 and two visits by John Paul II, in 1990 and 2001.

The country’s history is steeped in Catholicism going back to St. Paul, who is believed to have been shipwrecked on Malta en route to his execution in Rome.

About 85 percent of Malta’s 516,000 inhabitants say they are Catholic believers. Catholicism is part of the constitution and Malta is the only European Union country that completely bans abortion.

The pontiff will conduct mass Sunday before an estimated crowd of 10,000 people in Floriana, next to the capital Valletta, following a visit to the Grotto of St. Paul, where the apostle is believed to have sought shelter.

Also on Sunday, he will visit migrants living at the Hal Far peace lab, a migrant centre founded by a Franciscan friar in 1971 in honour of former pope John XXIII.

The centre currently houses 55 young male migrants from across Africa but is preparing for the arrival of refugees from Ukraine.

During his weekly audience Wednesday at the Vatican, Francis praised Malta for welcoming “so many brothers and sisters seeking refuge”.

But non-governmental rescue groups who patrol the Mediterranean repeatedly accuse Malta of ignoring calls for help from migrants in its waters, refusing to let them land, or alerting Libyan authorities to intercept them and bring them to overcrowded, unsanitary detention camps in Libya where they risk torture and abuse.

Maltese authorities argue the country takes a disproportionate share of migrants to Europe given its small size.

Ahead of Francis’ visit, German charity organisation Sea-Eye called on him to ask Maltese authorities to allow over 100 people pulled to safety by one of its migrant rescue ships to dock.

Following the pope’s visit with Abela, whose Labour Party won a third term in government following general elections last weekend, he will take a catamaran from Valletta’s Grand Harbour to the island of Gozo, where he will preside over a prayer meeting at the national shrine of Ta’ Pinu.

Francis, who suffers from a painful sciatica that has occasionally caused him to cancel official events, did not take the stairs in boarding the plane from Rome’s Fiumicino Airport Saturday morning, instead using a lift for reduced mobility passengers.